‘It was so crazy’: Man grabs shark with bare hands on Delaware beach in viral video 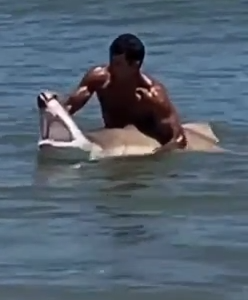 A swimmer was caught on camera handling a shark off Cape Henlopen State Park Beach in Delaware last weekend.

The video, shared on Facebook by Delaware native Rachael Foster, depicts a man grabbing onto the shark, trying to unhook the shark after it had been caught. The video yielded a combined 200,000 views on Facebook and TikTok.

“Everyone started yelling, ‘Shark, shark, get out of the water!’” Foster said. “It was so crazy, like a movie. Like Jaws.”

Foster said about 20 people were on the shore watching this all unfold.

Then, the shark was let go.

This is totally legal in Delaware.

According to the Delaware Division of Fish and Wildlife, sand tiger and sandbar sharks are prohibited from being kept and those that are not retained must be immediately released to ensure survival.

Although park rangers were on site to assist and monitor the matter on Sunday, Cape Henlopen is no stranger to sharks.

A 12-year-old boy was hospitalized at the beginning of June after being bitten at the park, causing a surfing and swimming shutdown at Herring Point. The bite was believed to be from a sand shark, according to a news release obtained by Delmarva Daily Times.

Despite the presence of sharks on the beach, Foster said she felt a little worried, but never unsafe.

“It was so cool,” Foster said. “And we come on the beaches a lot. Probably two to three times a week. But we’ve never experienced anything like that.”

0 comments on “‘It was so crazy’: Man grabs shark with bare hands on Delaware beach in viral video”