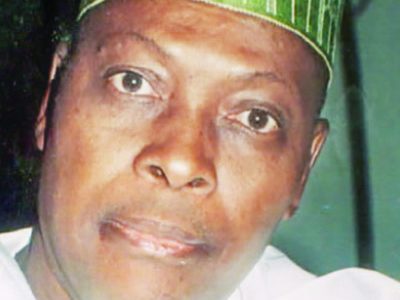 Firebrand political war-horse, Dr Junaid Mohammed has taken Catholic Bishop of Sokoto Diocese, Matthew Hassan Kukah to task, saying he knew little of what led to the deposition of the Emir of Kano, Sanusi Lamido Sanusi.

“To invoke the lies and the shameless attitude of the former Emir of Kano is unfortunate because I have known him for the past 40 years. I knew him; I knew his father and mother. I also knew his grandfather. So, you should be very careful about what you say otherwise you will push some of us to go public with what we know he exemplifies because I do not believe he has any right to assume that seat and I don’t believe he can be something holier than thou simply because you are shameless and can open his mouth and talk and abuse other people,” Junaid Mohammed, an elder statesman and Second Republic federal lawmaker averred.

steal from other parts of the country behave in a much better way than the thieves from northern Nigeria and they steal as much as everybody else. But everybody who steals you can see evidence of most of the thieves in Nigeria have either built clinics, they have tarred roads, have given children scholarships, built schools and have done all kinds of things. But you cannot find in northern Nigeria in 99 percent of the constituencies of the northern elite any evidence of a thief who served in Abuja or elsewhere passed here. I call the northern elite, therefore, to account for why we have saddled the rest of Nigeria with this excess baggage.” What do you think?

Well, first and foremost, Bishop Kukah is a friend, but I don’t have to agree with what he said. Secondly, I think he knows very little about the circumstances which led to the deposition of this character, Lamido Sanusi, the Emir of Kano. His appointment wasn’t done on merit; it was done on the basis of the power of cash and to the extent that northerners have been in power; the former Emir of Kano has been in power, he belongs to the same elite like his father and grandfather and whatever he says must be attributed to himself, to me and to the Emir of Kano and I want to be told what role, what clinic, what school the Emir of Kano built? I also want to be persuaded that the Emir of Kano himself is not guilty of the things he has been trying to ascribe to other northerners. Yes, there has been abuse of office, there has been corruption and these are issues I have been discussing with Bishop Kukah for over 30 years. But where I disagree with him is where they will say they are right and they are the only ones who are right and, therefore, they have the monopoly of wisdom, knowledge and of truth. If today Nigeria is in this mess you cannot simply segregate and say it is this part of the country that is responsible. Every part of the country is guilty and every member of the elite class in Nigeria is guilty and that include Bishop Kukah and Lamido Sanusi. Yes, there is corruption and I believe it has to be fought. Yes, northerners have been preponderantly in power; but it is because northerners have not been as reckless and as biased as you would want them to be; that is why the North is in this kind of situation. And I’ll rather we have northerners leading the country and leading the country in some measure of peace and harmony than having people who are prepared to subject the country to enormous catastrophe simply because they want to be seen as the success story in the politics of this country.

You said northerners have not been as reckless and biased as others would want them to be. But as you must have read, PANDEF and Col. Abubakar Umar, himself a northerner talked about nepotism in the governance of the country currently being led by a northerner. Lopsided appointments are not also things that can bring about peace and harmony like you said. Instead they breed discontent and tension. Can we now be speaking of merit here as the GMD of the NNPC said the other day when what seems to be at play is the protection and defense of unearned privileges?

Well, first and foremost, again Umar is an old friend of mine. If you know his history he went to Bayero University here in Kano. So, we have been friends and we are still friends. Umar was a former governor of two states and he was also Sole Administrator of Federal Housing Authority when it was in FESTAC Town. During his time as an administrator, I was invited by the government, the same Buhari government to be one of those who investigated the Federal Housing Authority. Now, I have never denied that there is patriotism in Nigeria, but to blame only the northerners, to me, is crudely unfair. I can tell you, for example, what I read; I don’t know the version you read, was that he was talking of the injustice in denying a lady who is now the acting President of the Court of Appeal her position and I am 100 per cent with Col. Umar because I believe that is a grave injustice. But if you talk about nepotism in this current government I would have mentioned what I had said two months into this administration. I think you are being unfair to me. I have spoken on the issue of appointments by this administration in several interviews that I have granted; but I am not the kind of person who blows his trumpet and tells people what I have said. But I know within six months of this administration I have said what I needed to say. I don’t do much writing as Bishop Kukah does and I may not be a great friend of the Nigerian media because I am not prepared to turn the other way when you hit me; I hit back. That’s my attitude. So, to tell me that they are the only people who have spoken about nepotism, I think it is unfair. To invoke the lies and the shameless attitude of the former Emir of Kano is unfortunate because I have known him for the past 40 years. I knew him; I knew his father and mother. I also knew his grandfather. So, you should be very careful about what you say otherwise you will push some of us to go public with what we know he exemplifies because I do not believe he has any right to assume that seat and I don’t believe he can be something holier than thou simply because you are shameless and can open his mouth and talk and abuse other people. For example, why hasn’t Lamido Sanusi…he knows that I was opposed to his being the Emir; he knows that I played a role in getting him removed, why hasn’t he mentioned how many houses I have? That’s all I will say on that.

You said you played a role in getting Emir Sanusi out of the throne. Why would you do that?

Because I believed he was not properly elected. The kingmakers were blackmailed in electing him the Emir and as a result of his being elected the Emir not based on merit many people died. I don’t believe that the throne of the Emir of Kano is worth the life of any human being. But when he was removed against speculations that there was going to be violence, nothing happened because he was never the choice of the people. He was an imposition and many people died and many vehicles were burnt in Kano. Who is he?

Those are weighty allegations. Can you substantiate them if you are asked to?