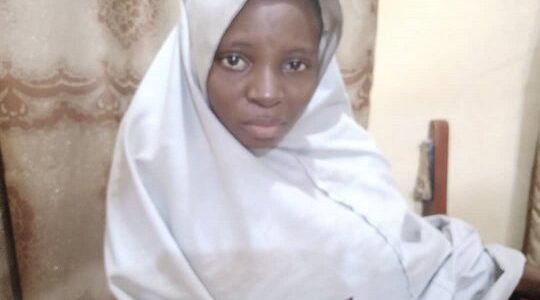 …Suspect: I killed her because my husband proposed to marry her as third wife

On January 1, while people across the world were celebrating the New Year, the suspect called the victim on the telephone, deceived and lured her to an uncompleted building in their neighborhood.

She reportedly used a sharp knife to stab her in the neck, chest and other parts of her body, police said.

The deceased father, one Kabiru Jafaru, declared her missing.

The following day, January 2, Aisha’s body was discovered in an uncompleted building in the neighborhood. The deceased’s father updated the police, who visited the crime area.

During interrogation, the suspect confessed the crime. The suspect, who is a second wife to one Sharehu Alhaji Ali, said she killed the victim because her husband had proposed to marry her as a third wife.

The Nation gathered the suspect’s husband had proposed to the deceased, and they were in courtship for six years and their wedding was scheduled to hold on January 9.

Haruna, a Deputy Superintendent of Police (DSP) said the case has been transferred to the Police Command’s Criminal Investigation Department (CID) for discrete investigation.

He said, upon completion of investigation, the suspect will be charged to court for alleged homicide.