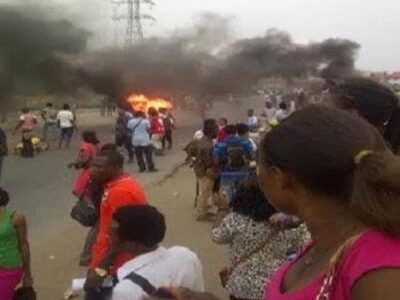 The #EndSARS protest is taking a new dimension in Asaba, Delta State capital as hoodlums appear to have hijacked the hitherto peaceful exercise.

This followed the razing of the operational office of the Federal Road Safety Corps (FRSC) along the Benin-Asaba-Onitsha expressway, as well as the beautification garden at the nearby Koka junction.

Suspected hoodlums were said to have stormed the FRSC operational office on Wednesday night and set it ablaze.

A Road Safety Officer who spoke to newsmen on condition of anonymity, said “our operational office has been completely razed down.”

Also, the beautification Garden at Koka junction, Asaba, has been set ablaze by suspected hoodlums.