Love me in spite of my wrinkles’ 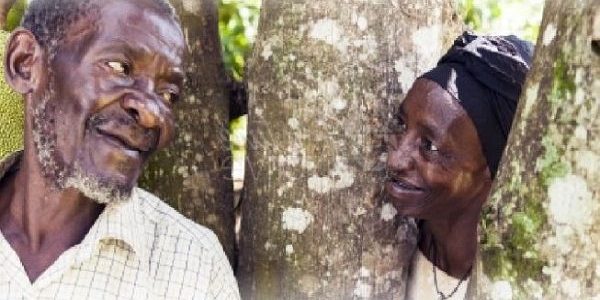 Ageing is a tragedy, a bouquet of forlornness, deprivation, and muted rage for some older Nigerians. Even so, modern psychology and literature recommend romance and sex as anti-ageing elixir but not every older person would drink the kool-aid, writes OLATUNJI OLOLADE, Associate Editor.

If romance is a gift to the granny over 60, sex is the treat. The sundae on the twilight years. But Deborah Ikuom, 63, would skip the gift and savour the treat. Some like it vice versa. Not Ikuom. She longs to be “cradled and manhandled.”

“At my age, I have no use for pointless romance. I am past that. It’s 14 years since my husband died. I am dying to be touched. I am human. I need to be rocked by a man. Some younger man perhaps,” she said with a chuckle.

Would Ikuom live her fantasy? Grannies have needs too. A yearning for romance and passionate sex. But Ikuom’s three children and 11 grandchildren would have none of that.

Three years ago, her youngest child caught her flirting with Pa Festus, her late husband’s friend; Ikuom called it a “harmless romp” but her children were aghast. She said, “I was 60, and he was 71. He couldn’t have harmed me but my daughter who saw us railed at him and marched him out of the compound. Then my eldest son visited him (Pa Festus) to threaten him. We were next-door neighbours at Ojodu.” The retired auditor believes her children overreacted, adding they owed Festus, whose companionship saw her “through several dark times” while her children “were busy getting on with their own lives.”

“Till his death, in March 2018, my children denied me further contact with him. They lured me overseas in order to separate us. Now that he is dead, my children are relieved. He has been buried but my needs are alive and still very intense,” she said.

Ikuom pines for good sex but scorns the “heartache and messiness of romance.” She said, “I do not entertain time-wasters. Romance isn’t for me if it won’t meet my physical needs. I am single, and at that point in my life when I have to be practical over my choices. My heart is a closed book right now. Flowers and poems don’t work on me if the physical isn’t in the mix.”

What Ikuom dreads as the “messiness of romance,” Taiwo Ajai-Lycett, 79, embraces with luscious zest. Even so, she has “no romantic reminiscences to drool over, just mere daydreaming. More is the pity,” she said.

“Intelligent men are fortunately for me, though they are certain of what they’d like to do with me, they are rightly cautious to broach the issue for fear, I suppose. I might laugh them out of court, so to speak! I find it all intriguing, I guess.

“I’m a woman easily bored by the games the genders play. Fascinated though I may be about good old Lady Love, I have always been somewhat strangely bored with the physicality of its expression. Noisy, sweaty, deranged and totally chaotic!,” she said.

Ajai-Lycett relishes a man with whom conversation is akin to love-making. Call it mind-sex but “this huge synergistic energy exchange phenomenon – is what truly gets me, turns me on – not quite the writhing of bodies, glorious essential though that may seem,” she said.

The 79-year-old appreciates the ebb and flow of it. “The to and fro movement is the basic rhythm of life, the universe, and everything in it: This is sex. That’s why it’s still nature’s capital creation,” she argued.

Between Ikuom and Ajai-Lycett, a thunderous debate resonates with the romantic lives of Nigeria’s senior citizens. For Deborah Osho, 65, even the slightest pressure to have sex raises her hackles let alone the mythicised fabulous sex. The “retired housewife” has gone 17 years without sex. How does she do it?

Occasionally, she gets “hormonal” but a “punishing, cold bath” and stern “praise-worship” rids her of such “devilish desires.” When it persists, she simply takes a long walk or seeks relief in the scriptures.

“Se o je ounje ni? (Is it food?). I outgrew sex around age 48 and focused on my children and grandchildren. Even my husband, while he was alive, had no choice but to zip up. I was gone most of the time, and he was too responsible and god-fearing to start sleeping around. God bless his spirit.”

Character labels, all. And “The stereotype is grim,” says Stanford University lecturer and physician, Walter Bortz II, in his book, “We Love Too Short and Die Too Long.”

He argues, “The common notion is that when you are old you don’t, and maybe shouldn’t have sex. Our studies have shown that older people are sexier in attitude and performance than they have been credited for.”

But, who’s responsible for the myth that sex becomes unimportant as one ages?

Tari Okunade, a sociologist and sex therapist, argued that such cultural prescriptions are often learned and self-imposed mostly by the female gender. “Who says a woman must give up sex at a certain age? Oftentimes, when the husband can’t get it up anymore, he expects his wife to swear off sex. That’s selfish.

“Most of my clients these days are younger men in their mid-30s and early 40s. Poor lifestyle choices including excessive work stress, lack of exercise, smoking, alcoholism, poor diet are responsible for their inability to get an erection,” she said.

Brothels to the rescue

Older men have too few options for romance and sex. David Atolagbe, 72, lamented that he would be sexually active if his wife spent more time with him. The retired transporter visits brothels any time he feels the throb of an erection because his wife relocated to Ondo six years ago to live with their only daughter.

“She claims to be treating her daughter to help her conceive a second child. What can I do? I am too old, too poor and too weak to marry a second wife,” he said.

Unlike Atolagbe, Idris Bello, 67, has no problem getting it up but he has reluctantly embraced “more evolved forms of love-making” with his wife who has completely lost interest in sex. “She always cried that it was painful. Our family doctor said it’s due to her loss of estrogen; its some kind of medical condition,” he said.

A recent study of the Sexual Behaviours among the Elderly Population in Osun State revealed interesting dimensions of sex among older persons. The study which was conducted by Bolaji Egbewale and Wasiu Adebimpe of the Departments of Community Medicine of the Ladoke Akintola University of Technology, Osun, and the University of Medical Sciences, Ondo, revealed that of 491 elderly respondents, about one third said they still enjoy sexual intercourse, while less than one-tenth described themselves as sexually active coupled with about one third claiming they still have interest in sex. Only a few and far less than one-fifth of the respondents have had sexual intercourse within the last 12 months with about two-thirds reporting less interest in sex.

That taciturn disposal to sex

Yet a buttoned-up disposition to romance and sex among senior citizens over 60; many would rather not discuss it. They raised their elderly brows at “modern society’s rancid preoccupation with sex.”

But “the fascination with, and hankering for sex had always been part of older people, it’s just that many of us are too scared and too prim and proper to admit it,” argued Adesoji Edison, 61, a London, United Kingdom (UK) based wellness entrepreneur.

Corroborating him, his 65-year-old wife, Olivia, stated that more older people are accountable for their dreary sex lives. “Many are too timid to go out there and explore. They scoff at internet dating, tantric sex, and other sensual reawakening. It’s their loss. My husband and I had our hurdles but we faced them head-on, and today, we have found our pleasure place. It’s so blissful and private to us,” she said.

The Edisons are singing to the wrong choir perhaps. Sango-based retail grocer, Romoke Sotunde, 69, has never heard of tantric sex, a meditative form of coupling that arouses, heightens, and postpones orgasm.

She said, “My husband is 81 and he lost the capacity for sex after he clocked 77. I lost interest when I turned 50. I endured until I turned 54 and begged him to take a second wife. The second wife was 46 years old but she ran away after eight months because she couldn’t withstand his massive size and libido. Now, we are more concerned about making heaven,” she said, stressing that it would be irresponsible and childish of her to lay with another man at her current age.

Yet “romance and sex are good for older persons,” argued, Bimpe Oke-Edet, a sex therapist and educator. It’s a good exercise of mind and body. However, intercourse isn’t mandatory for couples as they age. There’s always the alternative of a romantic, fulfilling sexual encounter that doesn’t include penetration, she said.

Indeed, there is more to romance after 60, than sex, argued Victoria Akinkugbe, 72. The UK based retiree stressed that “There comes a time in a marriage relationship that you outgrow the need for physical sex or at least, it’ll be reduced in tempo…Yes, I do believe in romance. You may outgrow the manner in which you express it, but it never really goes away. The fondness is always there. Love and tolerance are the key ingredients,” she said.

Health and relationship experts argue that sex after 60 should be more freestyle and less about achieving orgasm. Desire, however, must be allowed to assume its own shape.

Ajai-Lycett, 79, noted that the way sex works inevitably changes, as bodies change and libidos wax and wane. Yet a 63-year-old like Ikuom may feel lustier with age, and eagerly hop in the sack with “a virile younger man perhaps.” Osho, 65, would rather take a long walk or a “punishing cold bath.”

Not everyone can rip off their clothes at 60 through 75 to 90 in an intense fit of desire. As they age, folk get more conscious of the loss of taut, supple skin. For instance, Raphael Nzom, 74, dims the lights because his wife, 69-year-old Chima, dreads seeing her frazzled belly and facial wrinkles in their bed’s fancy-glassed headboard.

Nzom persistently assures her, however, that he would rather desire her for her furrows than forgive her for her flaws. But Chisom worries, all the same, ruing the dark story told by her human body.

For many older persons, the narrative is stark and grisly: bones grow brittle, the eyes strain, and the heart flags at pleasure and pain. Some internal organs fail. Bladders fill up too often, bowels don’t empty enough, and poisonous proteins clutter the brain to form senile plaques.

But through the wrinkles and the pain, many would rediscover love or lust for someone all over again.

0 comments on “Love me in spite of my wrinkles’”