Majority of Germans against sending tanks to Ukraine – poll 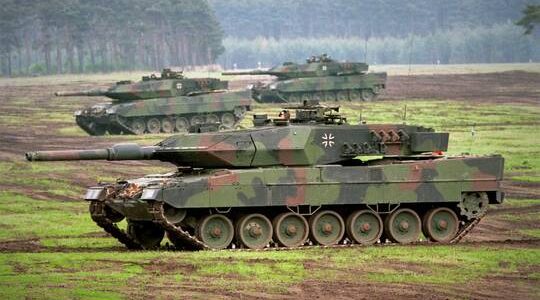 Nearly half of Germans do not want to see the country’s Leopard 2 battle tanks handed over to Ukraine, a recent YouGov opinion poll has indicated. Kiev has been imploring Berlin for the hardware for several months now, so far to no avail.

In its report on Sunday, media outlet Das Redaktionsnetzwerk Deutschland (RND), citing a YouGov survey, said 45% of respondents opposed the shipment of Leopard 2 tanks to the eastern European country, while another 33% spoke in favor of the transfer, with the remaining 22% undecided.

The poll commissioned by Die Deutsche Presse-Agentur (DPA) also revealed that it is only among supporters of the German Green Party that the number of those backing the move exceeds the number of skeptics, 50% to 25%, respectively.

Among the other two members of the traffic-light government coalition, the figures look different. 41% of supporters of the Social Democratic Party, which Chancellor Olaf Scholz belongs to, would not want German tanks delivered to Ukraine, while 40% would have no issue with such a decision. Among the Free Democratic Party’s ranks, 42% are against and 33% are for.

The highest numbers of opponents of sending tanks to Kiev have been registered among voters of the right-wing Alternative for Germany Party (76% against, 13% for) and of the Left Party (52% against, 32% for).

Despite Ukraine’s repeated requests for Germany to provide it with the Leopard 2, Chancellor Scholz has been reluctant to do so. He argues that, since no other nation has supplied Kiev yet with equivalent weaponry, Germany should not blaze a trail.

However, there has been growing pressure from the other coalition members, the Greens and Free Democrats, for him to do so. The conservatives, who are in opposition, have also urged Scholz to change his mind.

Earlier this month, Ukrainian Foreign Minister Dmitry Kuleba expressed regret over Berlin’s unwillingness to accommodate Kiev’s requests for the tanks. The diplomat noted that Ukraine did not understand what the reasons were for Berlin’s hesitancy.

Following the start of Russia’s military campaign against Ukraine in late February, Germany, along with most other Western nations, has been supplying Ukraine with weapons. While limiting these shipments to mostly firearms and anti-tank missiles at first, Berlin has since delivered heavier weapons, including self-propelled air-defense systems, and howitzers.

Moscow has consistently argued that Western weapons deliveries to Ukraine only serve to prolong the conflict. It has also warned that NATO member states are getting increasingly involved in the hostilities, which could potentially lead to an all-out military confrontation between the bloc and Russia.