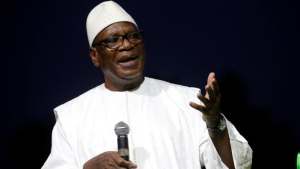 Few hours after President Muhammadu Buhari received his predecessor in office, Dr Goodluck Jonathan, at State House, Abuja. Dr Jonathan, who is ECOWAS Special Envoy to the Republic of Mali, mutineering soldiers in the country has detained President Ibrahim Boubacar Keita and Prime Minister Boubou Cisse, according to one of their leaders.

“We can tell you that the president and the prime minister are under our control,” the leader, who requested anonymity, told AFP.

He added that the pair had been “arrested” at Keita’s residence in the capital Bamako.

Earlier, soldiers launched a mutiny from the nearby garrison town of Kati.

Another military official, who also declined to be named, said the president and prime minister were in an armoured vehicle en route to Kati.

Mali’s Prime Minister Boubou Cisse had however called for “fraternal dialogue” with soldiers who seized a key military garrison and have triggered fears of a coup attempt.

“The government is calling for calm and makes itself available … to engage in fraternal dialogue in order to remove all misunderstandings,” he said in a statement.

The prime minister also admitted that the soldiers may have “legitimate frustrations”.

Details of the events in Mali remain unclear. But according to witnesses and officials, soldiers seized an important army base in the town of Kati, near the capital Bamako, on Tuesday morning.

France on Tuesday condemned “in the strongest terms” what it described as a mutiny launched by soldiers in crisis-torn Mali.

“France has become aware of the mutiny that has taken place today in Kati, Mali. It condemns in the strongest terms this serious event,” Foreign Minister Jean Yves Le Drian said in a statement that also urged the soldiers to return to their barracks “without delay”.

The West African bloc ECOWAS on Tuesday said soldiers had launched a “mutiny” in crisis-torn Mali and urged them to immediately return to their barracks.

“This mutiny comes at a time when, for several months now, ECOWAS has been taking initiatives and conducting mediation efforts with all the Malian parties,” the 15-nation bloc said in a statement.

“ECOWAS calls on all soldiers to return to their barracks without delay,” the statement added.

Witnesses earlier on Tuesday reported hearing gunfire at a key military base near the capital Bamako.

The African Union on Tuesday lashed the arrest of Malian political leaders by mutineering troops and demanded they be freed immediately.

“I forcefully condemn the arrest of President Ibrahim Boubacar Keita, Prime Minister (Boubou Cisse) and other members of the Malian government, and call for their immediate release,” the chairman of the AU Commission, Moussa Faki Mahamat, said in a tweet in French.

Former President Jonathan had briefed President Buhari on the political situation in the West African country, as a corollary to efforts by West African leaders to restore stability to the country.

Recall that President Buhari and four other ECOWAS leaders had visited Bamako, Mali, last month, followed by a virtual extraordinary summit of the sub-regional body.

Dr Jonathan, who was in Mali from Monday to Thursday, last week, recounted his meetings with the stakeholders, including political and religious leaders, Ambassadors of US, France, Russia, Germany, European Union, and other important personalities key to peace and cohesion in the country.

The main opposition group, M5 has continued to insist on the resignation of President Ibrahim Boubacar Keita, a position not acceptable to ECOWAS, which insisted only on democratic process in change of power within its jurisdiction.