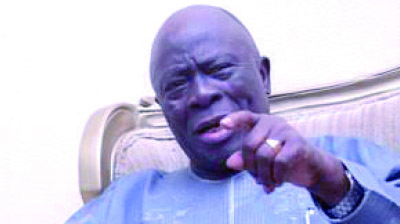 Elder statesman, Chief Ayo Adebanjo has warned that politicians angling for 2023 elections are only raising hopes that cannot be realized, as there is not going to be any election by that time unless the country is restructured. In an interview with VINCENT KALU, the Afenifere leader also pointed out that COVID-19 has exposed the inadequacies of the nation. More importantly, he warned that the problem of almajiri could consume the country if urgent steps are not taken to take the youths off the streets and educate them. “Some of the governors are still dragging their feet, only El-Rufai has said, no going back on educating them, and that is one of the things that can help us so that everybody can stay safe anywhere in Nigeria. Intellectuals, who should talk straight, but because they want appointments they will be talking to be politically correct”, he stated.

What is your view on the state of the nation?

Very unfortunate, we are in a very bad state, and things are getting worse. We were in a bad state before the COVID-19 pandemic – the medical, education, infrastructure, etc, everything was in bad shape. So when coronavirus came, it worsened things; there was no foundation to pick up unlike in other countries. It is now we are trying to put things that ought to have been there. We are even lucky over the level of disaster we have got; it could have been even higher. It’s terrible.

The corona virus came to expose our nakedness, we only have to thank God for how He is saving us because where are we going to begin when we have the square pegs in round holes just because the right people are not from your village or tribe. You are doing nepotism with impunity.

For the past months, years, all responsible people in this country have told him to restructure the country now, and he has not said a word, what type of leader is that or does it mean he is not hearing what people are saying and he is carrying on venially, he doesn’t care what people say.

But this decay didn’t start with the present government; it has been there and built up over time

I agree, but that is a very weak and insulting statement. Every government that goes there is supposed to improve on what is on ground; he was voted in to office to improve it. It was the corruption in the Jonathan government that made his election possible, but is corruption not worse now? When he chose Sylva, whose properties were seized because of corruption, he made him minister and returned the properties. What do you call that?

No doubt he met something bad, and it was because of that he was put in there to correct it, but has he improved the situation, is it getting worse; is the country as divided as he met it? The country is now in tatters. What has he done to bring us together? Every time he is accused of doing things that are dividing the country, he has never come out to say, no, and assuring the citizens that it is a misconception.

When you tell him that his appointments were not based on federal character, as against the provisions of the constitution, he will say that he wants to work with those people that he knows. Is that what the constitution says? Why are you people not pointing these things out, I’m already at my grave. If Buhari changes or not, it is not my business, I’m already in the grave, your generation will be the one to suffer.

Look at this period of interstate restriction; the security people you put there flout it because you don’t also respect the constitution. We know the problem of the country, but we lack the political will to solve it, and those who can solve it are talking politically correct.

You talked about nepotism, but the president has appointed a Yoruba, as his chief of staff?

It is not like that; that is how people are deceived. Is Gambari a Northerner or a Yoruba? Have you not read of what people are writing about him?

But Agboola is a Yoruba name?

You follow what people have been writing about him, you follow; but don’t bring that thing again. Those are the inheritance of Afonja, the Yoruba man who sold Yoruba land to the Fulani people, and they are the people now ruling Ilorin; Is Ilorin not a Yoruba town where you have an emir? Don’t let us go into that at all.

The president has chosen that one because they are in the same category of oligarchy, of boosting domination. All the people who are from the West and from Ilorin claim to be northerners in other to gain promotion, and they put Agboola there to deceive us. Throughout his school career, he wasn’t known as Agboola, and he can’t speak Hausa. Have you read about his story during Abacha regime, where he supported the killing of Ken Saro-Wiwa? He appoints people who are in the same school of thought with him. Those of us who know all these things, you hurt us when you begin to talk like this as if we don’t know. Until we restructure the country, we can’t make any progress because the man at the head is stubborn; he wants to rule us by force.

People are raising concerns over the movement of suspected Almajirai to the South, with some of them said to have tested positive to COVID-19, what is your position?

Former Minister of Education, Prof Jibirl Aminu created Nomadic Education, and so much money invested, what was the outcome; how many of them got certificate, the money went down the drain.

At that time, instead of concentrating on what El-Rufai is proposing on the Almajirai, they couldn’t do it at that time. Some of the governors are still dragging their feet, only El-Rufai has said, no going back on educating them, and that is one of the things that can help us so that everybody can stay safe anywhere in Nigeria. Intellectuals, who should talk straight, but because they want appointments they will be talking to be politically correct. Look at Tinubu defending the appointment of the man who was attacking others and defending the government at the UN.

When Amotekun issue came up, there was respite over the issue of herdsmen attacks, but recently the attacks seem to have been renewed in Southwest, has the security outfit gone to rest? Although I supported Amotekun, but I have always been agitating for a state police, which is an ingredient of restructuring, and autonomy. When you don’t know what you are fighting for then you are talking about all these things, which are fallout of our not going federal. The moment you want to turn a federal system to a unitary system of government you will be having all these problems. The intellectuals and academics, who are supposed to know this, pretend and want to be politically correct.

What are your expectations for 2023 elections?