Mbazulike Amaechi to govs: Prepare to defend your people against looming danger 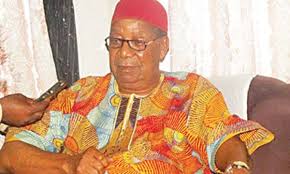 Elder statesman, Chief Mbazulike Amaechi, has alleged that the mass movement of young men from the North to the South, is for sinister motive. In an interview with VINCENT KALU, the First Republic Aviation Minister, queried the reason for such movement in spite of interstate border closure.

What are your thoughts on the state of the nation?

There is grave danger in the air. I really don’t know what is happening; what is happening doesn’t give one any hope, but fear. We are battling with corona virus, and we don’t seem to be preparing for the economic effect after the pandemic. We are confronted with a very big threat to security in Nigeria, particularly in the South. What is happening is not good enough.

There is now a planned, organised and well funded transfer of young men from the North to the South, in spite of the ban on interstate travels, but these youths, who came from distant places like Jigawa, Kano, Sokoto, etc, passed so many states and got to the East, and they were cleared until few of them were stopped, but you don’t know many that have managed to go through.

The security of the nation is manned by people from one side of the country where these youths are being shipped to the South. I don’t know if those youths have not been trained in the use of guns; there is a possibility that at some stage they might be issued weapons because the way the herdsmen handle military weapons in this part of the country shows that they were properly trained in the use of the weapons; they are not just cattle rearers. So, if these young men are being shifted down here, it means some authorities or some powerful individuals are financing them because when they offload them at Ibadan, Enugu or Umuahia and they move into the bush and so forth, because they don’t take accommodation with the people, what do they do, how do they eat, who prepares the food for them? There is a great danger and I’m trying to see if I should not relate this to a programme, which I saw and have been crying about and many people in the country have not been listening to me, particularly from South; they are not listening to me until the rain falls on them.

It is true that in 1961 to 1962, the Sardauna organised what he called, total liberation of the remaining part of the North to Islam, when he launched a massive attack; jihad on the people of Benue State, they didn’t succeed because Joseph Tarka mobilized United Middle Belt Convention and the NCNC in the federal government supported the anti islamization attack, and the prime minister wasn’t a fundamentalist and he didn’t like the things that were going on in Benue State to forcefully islamise the area. So, it failed.

I begin to imagine that what is happening now both with Boko Haram and herdsmen, and in the present attempt to move young men to the South or to move Almajirai to the South could be a repetition or a new strategy to complete that assignment. Since independence, the North has been ruling Nigeria, all the military rulers were from the North, except Obasanjo, who ruled for over three years, not that he conquered through a coup, but because Murtala Mohammed died. For almost 30 years of military rule, Northerners ruled, except the Obasanjo period. They wrote the constitution and converted the Nigerian federation into a quasi-unitary government, where even local government is determined at the centre. Local government obviously is a function of the regional or state government. So they control all the wealth in the country because the people don’t have powers again.

All the constitutions, the 1979 constitution, the 1999 constitution were all doctored and imposed by them on the people of Nigeria. For years now, Southern Nigeria and the Middle Belt have been clamouring for a sitting together to revive the constitution of the country and renegotiate the basis of this federation, but they have stood stoutly against it. The present government doesn’t want to listen to anybody at all; if you talk, they say you are a saboteur. All the armed forces in the country, every department that bears arm is controlled by them; all the strategic ministries, departments in the country is controlled by them, the finances of the country are controlled by them, the Customs, NNPC, the wealth of the country are controlled by them. I see what is happening now as a preparation to stop the people in case they demand a reversal of the present order. It is a grave danger, but I can only ask the people of Southern Nigeria and the Middle Belt to mobilise and stand by themselves, it is not only with arms you can fight and defend yourself; there are so many ways you resist; passive resistance can give you freedom, it doesn’t matter the amount of weapons, if you stay in your house, nobody can come and shoot you; it is when you carry gun that they shoot you; if you organize mass rally and demonstration they shoot you. They will shoot and get tired.

We suffered in our time to secure independence from the British, and it is that independence that we brought to Nigeria that is being taken away from the people of Nigeria to be controlled permanently by a section of the country, who wants to impose not only their political power, but also their religious power and force it down the throat of the people. It is left for our people to think. I’m reechoing what a foremost Yoruba actor in those days said – Nigerians, Igbo, Yoruba, Middle Belt, Southern minorities, think, the plan is heavy to draw down heavy rain on you people, you must try and save yourselves.

Southeast governors earlier in the year agreed with the Inspector General of Police on community policing model for the region, but last week the governors backed out from the arrangement. What is your position on this and what options should they follow?

They have now seen that these people are not sincere, they made the agreement with the Inspector General of Police, who came here and agreed and when he got back to Abuja and relayed the message to them, they told him that it was not in conformity with their strategy. They told him, no, you shouldn’t allow that, and the man reneged.

It is now the governors are giving it a rethink, and I’m happy that they are now thinking. It is better late than never. The Yoruba has the foresight to see it, even though almost all the Yoruba states are APC, but this is a non political issue; this is a question of your future, it is a question of your soul, it’s not the body again, it is about the soul because religion is about the soul and not the body. They want to rule your body and dictate what your soul should have. The Yoruba saw it in time and started running before the rain. I do hope that what our governors said a few days ago that they would mean it. Do something quick and start mobilising, we cannot face them in any war, in violence, but we must devise a way because the cloud that is above us is very heavy and when that rain falls, it will be very terrible.

It is said that Igbo are not united, how can they face an ‘enemy’ if they are divided?

When two fowls are fighting and they notice hawk hovering, they will run into safety together and stop their fight. Nobody will tell the Igbo when they have to come together; when the time comes, those who don’t want to come along will either be left behind or moved by force by the people.

Will this disunity not work against them as they struggle to produce Nigeria’s next president in 2023?

What is happening now is not political; it is only political in the sense of the domination, and it is not limited to 2023. In 2023, the people can still liberate themselves because even in the North, they are many people who are not in support of what is happening and those people want a genuine liberation and want association of equal federating bodies. In 2023, there can still be a union of those people in the North and the South to either take it politically; even if you elect a man in 2023, he has a lot of work to do because mines have been laid at every junction. In every department, the security of that place needs a lot of reorganization for that person to plant himself properly there.

If he goes ahead to remove all the heads of all the security departments, even the deputies and the third in ranks are the same people. They planned it in such a way that if this one goes away, this one steps in and it continues like that. Anybody who goes there must be prayerful and must be a true patriot and he needs to have a patriotic legislature to help him.

What is the hope for the Southeast in 2023, against the picture you just painted?

A foremost Yoruba leader, Chief Ayo Adebanjo, last week said that there would be no 2023 election if the country is not restructured. What is your take on this?

I have told you earlier that the only way this country can survive is by restructuring and rewriting the constitution and by giving the people a true federation, not a unitary government controlled by some powers from somewhere.

Without restructuring, only God knows what will happen. This kind of situation cannot continue for long; people are getting fed up with the insult, humiliation they are subjected to in this country.

Some argue that the 1914 amalgamation has expired after 100 years, can you throw light on this?

Who and who signed the agreement? There was no agreement; it was just an administrative arrangement by Lord Lugard and his secretary, who later became his wife. The amalgamation has no validity as far as the people of Nigeria are concerned. The only thing that brought Nigeria together was the Independence and 1960 constitution; that was what legally brought the East, the North, the West together, but not anything of 1914. Until 1962, we wrote the Republican Constitution, which finally removed Nigeria from being a stooge of Great Britain or a colony or protectorate of Great Britain, where the Queen of England will be the ceremonial head like in Canada and Switzerland.

So, we introduced a presidential constitution, where Nigeria will have a president. Before then, Zik was governor general representing her majesty, the Queen of England. The only document that brought the North, West, East and South together by the people of Nigeria themselves was the 1960 and 1962 Republican Constitution.

So, in effect, that amalgamation ab initio doesn’t exist. For instance, I stay in my village and say that I separate you and your wife, is that anything or I say, I join you and your wife. It was not done by Nigerian people, and so , never existed .

It was a force on colonial power and dominance and that is what the present government and their people want to do in Nigeria now by following it the way the Sardauna said- rule them and never allow them to rule themselves. He said it clearly and that is the policy they are pursuing now to perfect and strengthen it, but like I said earlier, it can’t last for long.

One comment on “Mbazulike Amaechi to govs: Prepare to defend your people against looming danger”