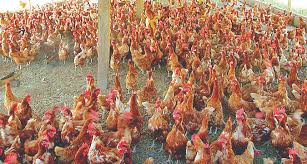 Poultry farmers in Enugu State have raised the alarm that over 5,000 direct and 100,000 indirect jobs, are at risk following the hash operating environment in the state.

They accused government’s agents, especially, those of Enugu East Local Government Area of frustrating poultry business in the state, even as they urged the Federal Government to reconsider its ban on importation of maize which account for over 75 per cent of feed composition in poultry farming.

Addressing newsmen during a protest march to the Enugu State Government House yesterday, State Chairman of Poultry Association of Nigeria (PAN), Mr. Onu Izuolisa, lamented that the COVID-19 pandemic has adversely affected his members nationwide. He regretted that while governments across the globe worked hard to reduce the burden imposed on farmers by the pandemic to ensure food sufficiency and security; farmers in Enugu East Council were being subjected to multiple taxation.

“Agriculture shouldn’t be taxed though in the LGAs, we agreed to be paying some levies. But there are some other illegal levies that we said we can’t pay and we have engaged the services of our lawyers to challenge that.“There was a time we considered shutting down the industry totally in Enugu State. The COVID-19 is a big blow to us because of the lockdown.