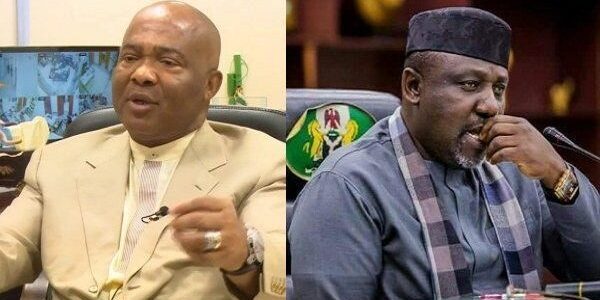 A former Governor of Imo State, Senator Rochas Okorocha, has challenged Governor Hope Uzodimma to publish the report of the Justice Benjamin Iheka-led panel, which indicted him for contract scams.

Okorocha said he spent the state’s funds on a myriad of verifiable projects scattered around the state.

The erstwhile chairman of the Progressives Governors’ Forum added that the Uzodinmma administration had in the past nine months failed acceptance test by Imo people, hence its recourse shadow-chasing.

He was reacting the report of the panel which was submitted to the governor on Monday.

Iheaka had said: “Monumental fraud was orchestrated by the contractors in the period under review, with strong collusion with some civil servants who helped in the fraud, which is evident in over-pricing of the value of the contracts executed.”

He added that there was a flagrant disregard for due process and the Public Procurement Act, seen in “outrageous contract pricing and shady contract executions as well as payment for non-performing contracts”.

Iheaka also said there was evidence of phony companies that were used to siphon state funds.

Okorocha said in a statement by  his media adviser, Sam Onwuemeodo, he was alarmed that Iheka, who is a judge, could go-ahead to submit the report knowing well that a Federal High Court (FHC) had ordered for the maintenance of the status quo.

He however asked the panel and the state government  to publish the final report verbatim.

The statement reads: ”For almost nine months on the seat, the government in Imo State has been struggling for acceptance. In his Independence Day speech the governor said that he inherited a systematic fraudulent system from (Emeka) Ihedioha.

Two days after, he said that Okorocha should refund N106 billion. Some days ago, it was that Okorocha’s appointees joined Uzodimma.