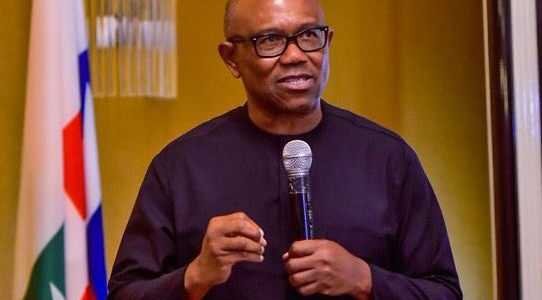 The presidential candidate of Labour Party (LP), Mr Peter Obi, has stressed that the cost of governance in Nigeria, criminality and corruption within government space has reached an unacceptable level. He said there was need to take drastic measures to reduce the trends.

Obi stated this in Gboko while speaking to newsmen after he addressed the NKST Synod in Mkar, Gboko Local Government Area of Benue state.

According to him, “There is no government that has eliminated everything but ours is at unacceptable level. We must reduce it to a drastical level.

“We must reduce cost of governance, criminality and corruption within government space,” he said.

Obi who lamented that Nigeria is not a productive country said: “We must make it productive, if we get it up and running, we will see that things will start changing.  We should put every resource to production and you will see the country change.”

On the recent population figure of 216 million, Obi averred that what should be of paramount concern is not how to reduce the birth rate but to make it an economic asset.

“China High Density Index, HDI, is high, India is medium and we (Nigeria) are still low even when we are one seventh of their population. How do we make our population an asset and a component of production should be the concern now”, he said.

The Presidential candidate who intimated that he was in the traditional town of Tiv nation on the invitation by the Synod, explained that he addressed them on the need to vote for credible, corrupt free individuals who will liberate the people out of poverty.

“It said that 130 million are in poverty and that is what should concern us. And that is what concerns me. How do we get this people out of poverty, this is critical and that is why I have come to help them make the right choice.

“Let them think of their children being in school, think about what they will give to the nation. Building a nation is the job of government and all Federal agencies within the nation. He further urged the people in Benue to support his candidacy so that together they could have a Benue that is secured where farmers could go to their farms and produce without any fear and where children will be in school and everything will be normal.”