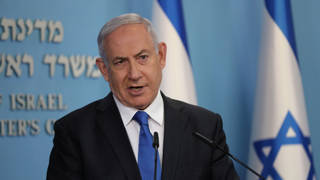 Israel is still committed to annexing parts of the occupied West Bank, PM Benjamin Netanyahu said, after a peace deal with the UAE was reached. As part of the deal, Tel Aviv agreed to suspend the annexation.

The revelation was made by Netanyahu in a televised speech on Thursday.

“There is no change in my plans to apply sovereignty over Judea and Samaria, withfull coordination with the US,” Netanyahu said, referring to parts of the West Bank region by their biblical names.

The remark came shortly after the peace deal between the United Arab Emirates and Israel was unveiled. Among other things, it contains a provision that Tel Aviv agrees to ‘suspend’ its annexation plans.

Netanyahu did not give any timeframe for when exactly his land-grabbing plans will go through, but apparently sought to reassure his hardline supporters, disappointed by the sudden U-turn on the annexation issue.

The Israel-UAE deal was first announced by US President Donald Trump on Twitter earlier in the day. Trump called the agreement a “HUGE breakthrough” and labeled the whole deal a “historic” achievement.

Most of the Arab world does not officially recognize the Jewish state, but countries such as Saudi Arabia have enjoyed quite cozy relations with Tel Aviv for years.