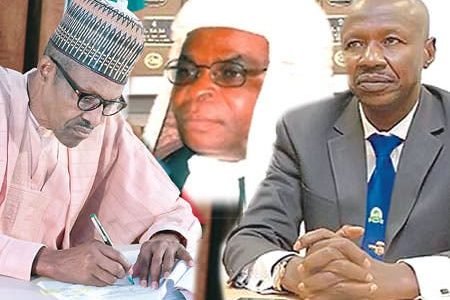 Some northern elders have reacted to the probe of the suspended EFCC’s acting chairman. A Second Republic lawmaker, Dr Junaid Mohammed, said it is unfortunate that a retired judge of the Court of Appeal would be called upon to “do a dirty job” for the government or some group of people against the embattled EFCC boss.

In an interview with Tribune OnlineMohammed said that as far as he was concerned, Magu remained innocent until he is pronounced guilty. “I stand by the basic principles of the English common law, and all laws, whether criminal law or the penal code, are derived from the British common law.

Everybody is innocent until he is pronounced guilty,” he said The frontline northern politician faulted the appointment of a former president of the Court of Appeal, Justice Ayo Salami, who he said left the Bench under controversial circumstances, as the chairman of the probe panel.

“The idea of asking a retired Court of Appeal judge like Justice Salami who left the Bench under a cloud to come and do a  dirty job for the government, in my view, is most unfortunate,” he said. He also condemned what he called the abduction of Magu to the Presidential Villa to face questions by the committee, describing the situation as disgraceful.

“The idea of setting up a kamikaze committee in the presidency, and in fact, not arresting but abducting somebody and taking him there and asking him questions, frankly speaking, is disgraceful. “It shows we are lying about the rule of law and this government is not sincere about fighting corruption. So, what they do with Magu is up to them.

“When he was doing their bidding, they were saluting him and now they are giving us the impression that they are done using him and they want to dump him,” the former lawmaker said. Mohammed also called for the overhaul of the antigraft agency.

He said he was of the view that the status of the EFCC and its enabling laws should be amended to guarantee the independence of the commission. According to him, people appointed as attorney-general should also be those that merited such an appointment and not lackeys of political godfathers or paymasters.

He also said that the EFCC ought to be accountable to the president directly and not some second or third parties. “The idea that the chairman of the EFCC must be cleared by the Senate is another disturbing scenario. See what happened in the last Senate because of Bukola Saraki and his friends.

They got away with making sure that Magu remained in an acting capacity. “If we must succeed in fighting corruption,  certain things must be rationalised and dealt with. The whole idea of corrupt politicians in the Senate being the ones to confirm the EFCC chairman is a sheer mistake and it should be changed,” Mohammed added.

Also, a founding member of the Arewa Consultative Forum (ACF), Colonel Muhammad Abdul (retd), said it is not good to condemn Magu as an investigation into allegations against him is still ongoing.

In an interview, Abdul, who is the district head of Tikau in Yobe State and a close associate of the president, said: “I  maintain that the Buhari I have known for decades has not changed a bit. “It is unfortunate that Magu has found himself in this mess. But since the investigation is still ongoing, let us wait and see.

We can’t just conclude and condemn him. My religion, Islam, teaches me to give a person a chance to defend himself. I  think what the president is doing is the best. “I am sure that if at the end of the day, he [Magu] is found guilty, the Buhari I  know will not spare him.

“What is happening now tells you that Buhari’s fight against corruption is real, not fake. My message to every Nigerian  who is saddled with responsibility is to fear God and always do the right thing because everyone will stand before Almighty Allah on the Day of Reckoning to defend his or her deeds.”

Also in an interview with Saturday Tribune on Friday, a former chairman of the Northern Elders Forum (NEF), Mr Paul  Unongo, said he was not surprised by Magu’s present predicament as attempts had been made over the last few years by anti-Buhari forces to kick him out of the system.

“However, the president has been shielding him because he had not found anything wrong with him. Don’t forget that when this thing started, the president set up a committee to probe him and at the end of the day he was given a clean bill. “These anti-Buhari forces were not happy. Now they want to tell the world that this man that got your [Buhari’s] support is a thief. He is not the person you think he is. “These forces are confused.

Is the president aware of what he is doing at the commission or is he acting alone? Buhari’s enemies are at work both within and outside the system,” Unongo said. He, however, described the investigation as good for democracy, saying it would deepen democracy and enhance the rule of law.

“Magu’s trial is good for democracy. It will portray the president as someone who is honest, someone who is willing to fight corruption by arresting and investigating his close friends. “The beauty of it will be for Magu to come out clean. If that happens, it will be good for our democracy. But if he is found guilty, let him face the music,” Unongo stated.