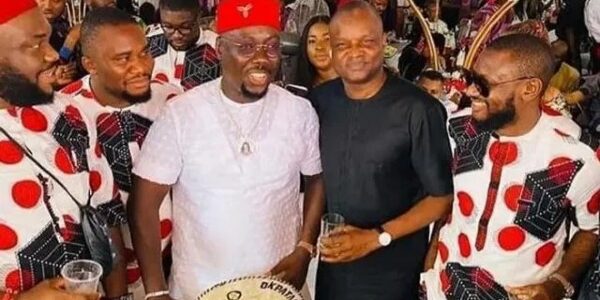 Popular police detective, Abba Kyari, was one of the guests at a star-studded ceremony where popular club owner, Obinna Iyiegbu, popularly known as Obi Cubana, buried his mother at Oba town in Anambra State.

Kyari, in a post on his verified Facebook page, defended his presence at the event, describing Obi Cubana as a “brother and good friend.”

He wrote, “Obinna Iyiegbu popularly known as Obi Cubana is one of the most hardworking entrepreneurs and humble personalities that I have known for many years. He is a brother and good friend.

“For his good nature and good heart, today I had to squeeze out time from my busy schedule to honor him by attending the burial of his beloved mom In Oba town, Anambra State.

“May God Almighty give the family the fortitude to bear the great loss. Ameen.”

There was a lavish display of wealth as Obi Cubana buried his mother in grand style, with artistes like D’banj and Davido performing at the ceremony.

Several celebrities, business people and politicians turned out in large numbers for the funeral. This was even as huge amounts of cash were ‘sprayed’ at the event, in addition to several gifts he had got before the event, including cows, foodstuff and drinks.

Though it was reported on several blogs that the businessman got about 246 cows, Saturday PUNCH could not independently verify this. However, one of his associates, Cubana Chief Priest, was said to have given him 46 cows.