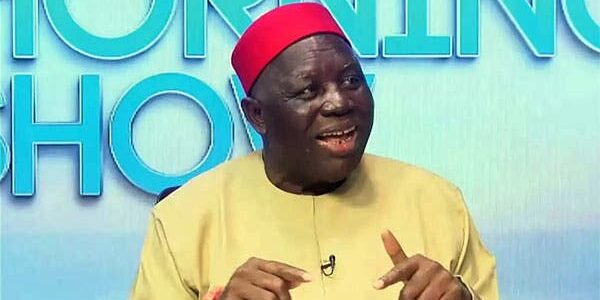 Ohanaeze Ndigbo has told the Senate Committee on 1999 Constitution Review that Nigeria must be a “union of equals where the composite units must have the ability to stand without begging the centre for survival.”

Presenting the ethnic nationality’s stance on Wednesday at the Owerri centre of the exercise, the Igbo apex socio-economic group’s President General, Prof. George Obiozor, stated that Ndigbo were asking for a clear and simple form of internal autonomy based on a restructured Nigeria.xhttps://be0ef5d1ddbc570807447efb0e934a76.safeframe.googlesyndication.com/safeframe/1-0-38/html/container.html

His words: “That categorically stated, we (Ndigbo) are of the view that the federation of Nigeria must be a union of equals and the composite units must have the ability to stand without begging the centre for survival. That is a federal system of government and with its characteristics of decentralisation and devolution of power among the federating units.

“Therefore, in the context of the imperatives and urgency of restructuring Nigeria, we should focus on getting the right things done for the right reasons and at the right levels of government. Indeed, what must be done is to recognise that history has an iron law of seriality of which no country, including Nigeria, can ask for exemption or exceptionalism. In fact, some countries are born with political tragedies waiting to happen and our history shows that Nigeria is one of them.

“All signs of national tragedies foretold are present today in full force in Nigeria. In fact, it would require a restructured Nigeria to contain the present forces and tendencies towards synchronised national crises and even a possibility of national disintegration.x

“Therefore, as national leaders, we must learn the lessons of history that in societies where truth comes last, tragedy comes first. And that the perennial problem or continuous dilemma in Nigerian politics has always revolved around issues of justice, equity and fairness.”

Obiozor continued: “As I have said several times, throughout history, those denied justice have had no interest in peace.”

We would expect you at the end of this exercise, in the interest of the nation, its unity and progress, to conclude with decisions guided by love and not by hatred and guided by our collective hopes and not by our fears.”x

MEANWHILE, the people of Old Nsukka Division in Enugu State, yesterday, urged the committee to approve the creation of Adada State from the present Enugu.

Stating that the agitation was first presented to the National Assembly in 1983, the agitators said the state would consist of seven local councils, including Igbo-Etiti, Igbo-Eze North, Igbo-Eze South, Isi-Uzo, Nsukka, Udenu and Uzo-Uwani.

Immediate Past President General of Ohanaeze Ndigbo, Chief Nnia Nwodo, who made the presentation on behalf of the people of the area, stated that the quest was borne out of the desire for rapid and even development in the region.

The creation of one additional State in the SE is long overdue. However, There are 3 Political zones in the present Enugu State comprising 19 Local Governments. Consequently , it extracting 7 out of 19 is grossly inequitable for the proposed Adada State . In my opinion some communities in the present Udi Local Government, Ebonyi and Igbo speaking part of Benue State ought to be extracted from Enugu , Ebonyi and Benue State respectively and included in the proposed Adada State, provided the consent of the indigenes of the said communities is first sought. Shalom