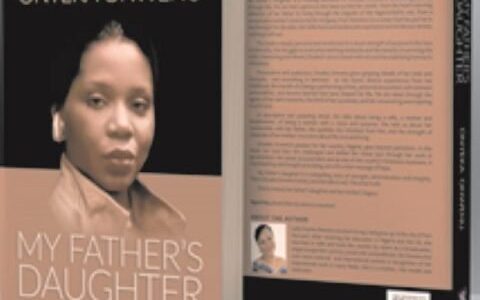 Expand Press Limited has announced the publication of Onyeka Onwenu’s memoir, My Father’s Daughter. The autobiography, set to be released on October 1, 2020, is a deeply personal account of the life of the iconic musician.

My Father’s Daughter chronicles Onwenu’s life as a musician, activist, wife, mother, and politician. In the autobiography, Onwenu’s formative contact with feminism and how her father’s life heavily influenced her decision to join politics is deftly explored. Onwenu’s political philosophy cannot be divorced from the exemplary foundation laid by her father, Dixon Kanu (DK) Onwenu, who cared deeply about the development of Nigeria when politics was not a means to amass wealth. Through Onwenu’s lens, the communal lifestyle of the Igbos, as well as how family core values are intricately woven into personal ethics, are fully displayed.

Onwenu’s patriotism and love for Nigeria is quite palpable throughout the book. Little wonder that My Father’s Daughter will be officially released to coincide with the 60th year Independence Day celebration of the country.

She also reminisces on how the Nigerian Civil War of 1967 – 1970 scalded her teenage experience. The debilitating effects of the Biafran war, and how the family remained bound amidst the chaos are themes that Ms. Onwenu serves up in her book. The fragmentation, alienation, and displacement that permeated the Igbo community after the war were also delved into by Ms. Onwenu. From her experience of the war as a young woman, the paranoia deeply planted by the effects of the conflict is captured.

The one time Television journalist documents her years in America, the culture clash, and the inevitable conflicts that are the products of being a migrant. She shares her experience of being sexually harassed in a workplace and how her decision to leave got her a job at the UN. There she crossed paths with a diplomat who encouraged her to drive social change in Nigeria.

The memoir covers her media experience. She talks about going back to post-war Nigeria, being confronted by the failing political system and her tilt towards politics to fulfil her father’s legacy. She equally documents the challenges she faced as a politician. She uncovers the failing state of Nigerian politics, and it is surprising how some of the difficulties faced after independence are still prevalent in the current political clime of the country. Ms. Onwenu also unravels how power corruption is not only restricted to the political system. She traces the foundational challenges faced by the Nigerian political system from the military era down to democracy.

Onwenu also explores her contribution to the budding Nigerian music industry of the 1980s. The reader is regaled with stories, the behind the scene happenings in the Nigerian Entertainment industry. She also exposes the exploitation of musicians by industry leaders and practitioners – an issue that still ravages artistes’ relationships with major industry partners in contemporary Nigeria. Artistes’ rivalry is also discussed by Onwenu and how unhealthy competitions led to numerous cracks. Her transition from a musician to an actor is also chronicled as well.

Onwenu discusses her private life. On the marriage front, she explores the challenges women face and how she refused to shrink herself to accommodate anyone’s insecurities about her fame.