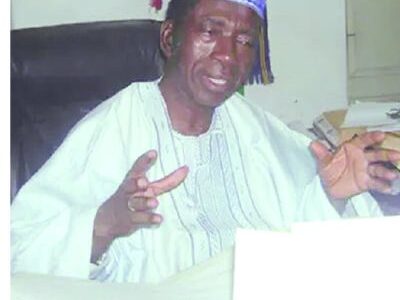 •Those calling for Nigeria’s breakup are frustrated

Former Minister for Education, Prof. Tunde Adeniran has said that individual’s integrity and competence should override ethnic or sectional political considerations in the choice of who will be elected the next Nigeria’s president in 2023. He discussed this and other national issues in this interview with TUNDE THOMAS.  According to the former minister, “We should be looking for people with integrity, people with honesty, people with the attitude, and people whose emergence would signify justice, and equity, and above all, people with the capacity to really solve the wrongs of the present situation now, of Nigeria in the past decades and so on. That’s what people should be looking out for, not just looking out to do some geographical elections. We should do elections that will turn around things for the country. I believe that Nigeria has very competent people in virtually every part of the country but a situation whereby some people will be prevented from coming out should be avoided. By the time you have an array of people then the country can begin to make a choice.”

How would you assess Nigeria’s journey in the past 60 years?

We ought to have done better. God gave us a wonderful, and a great country endowed with many resources more than any other country in the world, and we ought to have done much better. Looking back, some of those people who are lucky to be in charge of the affairs of the country particularly immediately after independence, they did their best within their own limitations, and those who came after them especially in the Second Republic also did their best especially trying to correct what went wrong with the First Republic.

But the present dispensation, the Fourth Republic has been an alarming disappointment. The country by now should have moved beyond primordial agitations, there ought to have been stronger ties and bonds, and Nigerians would have become Nigerians and not stifling themselves in the prisms of ethnicity, and so on. This is failure of nationhood.

We need to have outgrown those primordial limitations. This is unfortunate but I hope we can use the occasion of the nation’s 60th anniversary for very deep reflections so that our people can move beyond the primordial level we have been. We also ought to have been in a situation whereby by now we should be competing with some of those countries that are regarded as developed within the global community but instead we seem to be retrogressing. If we look around, we see some countries like Singapore, Malaysia, and these countries have moved on much faster. But in our own case, it has been very sad.

Former President Olusegun Obasanjo recently convened a dialogue with leaders of five socio-cultural groups across the country where he raised the alarm that Nigeria was drifting fast towards a failed state, do you agree with him?

I agree with former President Olusegun Obasanjo, and I believe in what he did trying to bring together different groups. It is a welcome development, and I think all well-meaning Nigerians, should rise up, and try to bring people together to think about solutions to our situation, and the way forward, and not for some groups to be thinking of how to run away from Nigeria.

Break-up is not the solution because you will be transferring the problems of the larger Nigeria to a new geographical entity by whatever name it is called, and that is not the solution. In fact, some people who have same mind perspective and ideological orientation even believe that Nigeria rather than breaking up or shrinking, other smaller countries around us should join us to make it bigger, and larger, and will be a country built on clear vision of justice, and equity in such a way that opportunities will be available for the advancement of people’s aspirations. This is the type of things we should be yearning for.

As for those canvassing for another national confab, there is no need for that. Another confab will be a waste of time, and resources. We can revisit the 2014 national confab. It can be a starting point for whatever we are planning to do.

Some people have even called for referendum, do you think there is anything wrong with those calling for such?

How do you see the deregulation of fuel and power supplies, and the attendant hike in prices?

I believe that these are things that when a country is very capitalistic and all that, these are the types of things you expect, and then even within the framework of capitalism, when you are deregulating you bear it in mind the need for people to be fully involved, and informed. So you don’t do things arbitrarily but must educate the people fully.

I believe that there is so much to be done by way of ensuring that even the costs of petroleum products are reduced to the barest minimum. If we have our refineries working, we will not be in this kind of situation, and when you look at what has been happening in the past you feel sorry for this country like the racketeering that took place during the subsidy regime. It was so devastating for a country like Nigeria, and Nigeria doesn’t deserve something like that. It was like a rape of a nation. It was worse than a rip-off. When you look at all these you discover that subsidy ought to have been removed long time ago. Nigerians should realize that things that ought to have been done before but which had not been done can still be done now. Let these things be done properly now. Let them realistically look at situations, and we move on from there. We should also make sure we not only have ameliorations to peoples conditions now but that we also work to be able to provide the necessary infrastructures in the necessary environment in terms of the cost of these services so that it will not be so burdensome on Nigerian people.

Should the 2023 presidency be conceded to the South, who between the South-east, and the South-west should have it?

I don’t know what people mean by concession. I think that would be within the framework of the various parties. I believe that they should look, with the situation that we are in now not into geography, and not into other considerations that are not related to the well-being of the Nigerian people or the future of the Nigerian nation. We should be looking for people with integrity, people with honesty, people with the attitude, and people whose emergence would signify justice, and equity, and above all, people with the capacity to really solve the wrongs of the present situation now, of Nigeria in the past decades and so on.

That’s what people should be looking out for, not just looking out to do some geographical elections. We should do elections that will turn around things for the country. I believe that Nigeria has very competent people in virtually every part of the country but a situation whereby some people will be prevented from coming out should be avoided. By the time you have an array of people then the country can begin to make a choice.

In the South-west, between Osinbajo, Tinubu, and Fayemi, who do you think the Yoruba people should back?

The Yoruba people like any other group in the country should look for those who have the capacity, those who have the sense of justice, sense of equity and have the interests of the masses at heart. Those should be the criteria to use, and not how people look, or any other factor outside of those ones I have enumerated. We should look for people that will fight for justice, people that will ensure that there is unity, and harmony, people that will transform this country, people that have the capacity to turn things around for the nation, and justice which is the first condition of humanity. People that have the dynamism to turn things around for the nation.

What’s your take on the controversial Water Resource Bill?