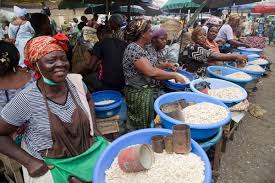 Prices of some foodstuffs, particularly eggs, beans and crayfish have continued to rise in Enugu State, the News Agency of Nigeria (NAN), reports.

NAN correspondent, who conducted a market survey in Enugu on Saturday, reports that the prices of foodstuffs had increased significantly between January and March.

Mr Linus Obi, a beans trader at New Market said that the price of beans had remained high for some weeks now due to the high cost of transportation from the northern part of the country.

“The cost of transportation has been the reason for high cost of most foodstuffs in the city,’’ Obi said.

The survey also revealed that the price of eggs had increased in major markets in Enugu.

Mrs Gladys Ogbodo, an egg seller at Garki Market, said that a crate of eggs was for N1,400 as against N900 in January.

Another egg seller at Mayor Market, Mrs Judith Eze, said that an egg was sold for N45 as against the previous price of N35.

Similarly, the price of crayfish was also on the increase in most markets in the city.

Mrs Nneoma Okoye, a crayfish seller at Garki Market, said that the current increase was higher when compared with previous years.

“The price of crayfish increased at the beginning of January due to its gradual off season as water has reduced in our rivers and we are still expecting rainfall in the country.

“We are hopeful that in a short while there will be a reduction in the price of the commodity,” Okoye said.