Rage In Senate Over Massacre Of 67 Borno Rice Farmers 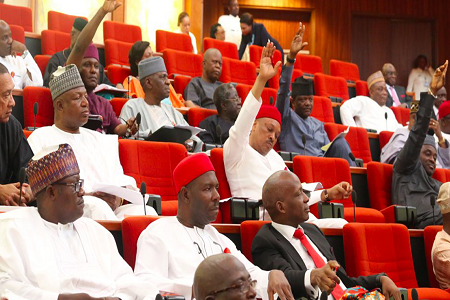 President Muhammadu Buhari-led Federal Government has lost its legitimacy to oversee the affairs of the nation especially its core mandate of securing lives and property, the Senate has said.

This was the verdict of the Senate following the massacre of 67 farmers on their farmland on Saturday.

The motion entitled “Beheading of 67 Farmers in Borno By Boko Haram insurgents: Need for urgent decision” also called for the immediate transitional removal of service chiefs which it described have overstayed their time without having new ideas to combat the insurgents.

Arguing his motion, Senator Shettima said the attack on farmers is deliberately being orchestrated to destroy the economy of the poor people, wondering how the Nigerian military will continue to use same tactics that overtime have not produced any result.

He pointed out that President Buhari and the Service Chiefs must take responsibility for the failure which led to these killings especially as they have the constitutional mandate to secure lives and property and ensure the welfare of the people.

“The Senate further observes that whatever it is that the military is doing and is not working and if the president thinks that the security men are doing their jobs very well, then the logical implication of such assumption is that the president, as the constitutional Commander in Chief of the country, has failed in his most rudimentary assignment of securing the country.

“I hope this was not the case and I fervently believed that this is not the case. I believe that the president has good intentions of the nation at heart and he is committed.

“We cannot as a nation move forward until the lives of all Nigerians are protected and secured as the primary objective of the government is the security and protection of its citizens.

“Protecting the lives and property of citizens is the primary responsibility of government and any government that cannot discharge this obligation loses any iota of legitimacy,” the Senate said.

The Senate in its resolutions reiterated its call for the sacking of the service chiefs whom it said lacked new and solution-driven ideas in decimating the Boko Haram insurgents and other issues of insecurity in Nigeria.

The resolution of the Senate “urges the President of the Federal Republic of Nigeria to immediately initiate a transitionary process of phasing out the currently overstayed security chiefs and replacing them with new ones with new ideas and solutions.

“Urges the President to take immediate steps to restructure, remodel and remove the entire security architecture and provide enough state of the art weapons and equipment to adequately combat the belligerent power of the insurgent.

“Urges the president to immediately initiate hope into widespread allegation on corruption and leakages in the security structure and put a mechanism in place to foster transparency and ensure all resources meant and deployed on security are actually spent on the needs on the ground.

“Impress in the federal government to aggressively explore multilateral and bilateral forms of partnerships with the neighbouring nations of Chad and Cameroon with the view towards reviving and strengthening the multinational joint task force and find a lasting solution to the cause of the insurgency in the Lake Chad region.

“To impress in the government to as a matter of urgency recruit at least 10,000 civilian JTF versatile with the local terrain in Borno, its agro regions under the aegis of the Nigerian Security and Civil Defence Corps to complement the effort of the Nigerian Armed forces.

“Direct NEMA and NEDC to provide succour and psychological support to the bereaved families include the ministry of humanitarian affairs to compensate the families of 67 slain farmers.

“Impress on the federal government to provide proper welfare and security personnel fighting in the frontlines and give prime attention to the compensation of fallen soldiers, as that would boost soldiers’ morale and aid their concentration.

“Finally, as a way proffering long term solution to Nigeria’s existential security challenges, the federal and state government should adequately address all remote and immediate causes of insecurity in this nation and this must include a comprehensive package for rehabilitation, employment and other social vices.”

Senator Shettima who pushed for the probing of funding to the Nigerian military said he was not unaware of the possible danger he is exposed to for this call.

His words: “Dear colleagues, I am not a fool, I know the consequence of unveiling a masquerade, they will unleash their foot soldiers and pundits, just for merely asking that let there be a probe of the financing that are being advanced to the Nigerian Military establishment.”

Senator Ahmed Keita said the military funding must be investigated and if this matter is not addressed, there may be another massacre and round of mourning in the future.

Keita said a similar situation played out in Katsina where over 38 persons were killed randomly in various communities, underscoring the need for action as other cases of violent killing in the country.

Keita said while he is convinced that the president is doing his best, such best efforts do not translate to tangible result of public safety.

“I believe that the president is doing his own best. But his own best is not enough when you cannot see the result on the ground, this is what is happening.”