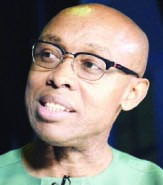 Prof Chidi Odinkalu, former chairman of the National Human Rights Commission (NHRC),is the senior team manager for the Africa Program of Open Society Justice Initiative. He says the thriving insecurity in the country is not a failure of the military but a reflection of the poor quality of leadership we have in the country. He argues that for military Commanders to succeed,the political leaders must be on their toes and do their jobs. He also addresses other national issues.

What is your take on the security situation in the country and the appointment of new Service chiefs?
Nigeria’s insecurity is not a military problem. It is a leadership crises and reflects the poor quality of leadership we have in the country. So, I don’t expect military Commanders to sort it out. It is wrong in a democracy to look to military Commanders to sort out matters of internal insecurity. For them to be effective, they need the political leaders to be on their toes and do their jobs. Sadly, Maj-Gen. Muhammadu Buhari is out to lunch and not much else happens around him because only one person can do the job of Commander-In-Chief at any particular point. So, in a sense, your question in my view is evidence of the problem: looking to the soldiers to fix a leadership vacuum doesn’t work and won’t work.

The South East zone is agitating over their non representation in the appointment of the new commanders, just as they were left out in the last crop of Service commanders. What do you say to that?
The Commander-In-Chief has exercised prerogatives that are exclusively his under the constitution. I am not going to get bogged down by Buhari’s well acknowledged nepotisms. Can we go to something else please?

What does the law say on these appointments, especially the 1999 Constitution of the Federal Republic of Nigeria and the Harmonised Conditions of Service of the Armed Forces. What exactly are the criteria for the appointment of Service chiefs?
The nominations of the Service Chiefs have to go to the National Assembly for the consent of the Senate. I should say that the Senate has not ever with-held consent to any Service Chief presented to them by a president.
How do you see the security situation in the country; the recent clashes in Ondo, Oyo, and Orlu have raised concerns regarding the creation of regional security outfits?
Again we return to the issue of leadership. First, I don’t want to make assumptions about the facts of these situations. The claims and counter-claims need to be properly established and validated. It is unfortunate that government takes such a cavalier view of the loss of Nigerian life or the killing of Nigerians by security agencies. The second thing is that under this regime, the government appears to have done everything to tell the armed herders that they are beyond any rules. This same government proscribed the Shiites as a terrorist organisation. No one has accused the Shiites of killing anyone. They are the people who have been killed. This same government has also proscribed the Indigenous People of Biafra (IPOB0. But, they coddle the bandits, sit, negotiate with and pay ransom to them and threaten journalists who report on the murderous campaign of the armed herders. That is what the country has turned into.

The latest corruption perception index (CPI) report of the Transparency International (TI) suggests that Nigeria is sliding farther down the ladder. What is your take?
If you listen to the Senior Special Adviser to the president, Mallam Garba Shehu, the CPI rating is a reflection on Nigerians not on Buhari. I guess Buhari, as far as Garba Shehu is concerned, is not a Nigerian. But the record of the regime on fighting corruption has been abysmal: the chairman of the Economic and Financial Crimes Commission (EFCC), Ibrahim Magu, has been toppled by corruption allegations; the chairman of the Presidential Asset Recovery Panel, Okoi Obono-Obla, forged his credentials and is being prosecuted for it; even the Attorney-General of the Federation and Minister of Justice is himself under lots of cloud. There are reports that there is a parallel court in the Presidency controlled by the son of the Chief of Staff who is on the take but the response of the regime is to try to shut down the medium that reported that. They fight corruption!

The TI report is based on perceptions that may not necessarily be true; are there available data to back the report?
I don’t work for TI nor am I their spokesperson. The regime has, however, been very voluble in announcing endorsements from their foreign friends, real and imagined. So, how can they now complain. If you recall, they were the first in 2015 or 2016 to have claimed credit for marginal improvement in Nigeria’s CPI?

If we are to go by the TI report, one will say that the anti-corruption crusade has been mere rhetoric, how best can we go about fighting corruption then?
Discussing how best to go about the anti-corruption crusade will require a separate conversation. I am not sure there is the time or space here to deal with this question. I am certain, however, that you can’t deal with corruption if the president is out to lunch, no one is in charge; the Attorney-General is under a cloud and there are no consequences for malfeasance. That is how not to fight corruption.