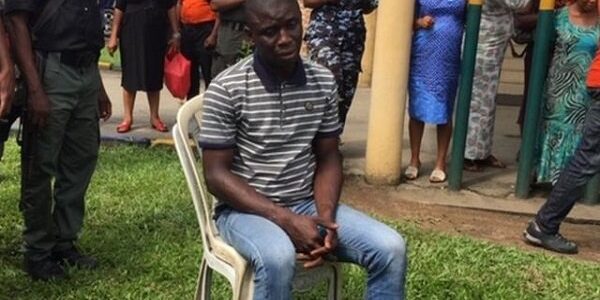 The State High Court sitting in Port Harcourt, Rivers State on Friday condemned a serial killer, Gracious David-West, to death by hanging for murdering nine young women at different hotels in the state.

David-West, who hails from Rivers, killed his victims between July and September, 2019, before his attempt to kill his 10th victim identified as Benita Etim triggered an investigation that led to his arrest.

The trial judge, Justice Adolphus Enebeli, who found him guilty following diligent prosecution by the state, said he should be hanged by the neck until he was confirmed dead.

The second defendant in the case, Nimi ThankGod, a manager of one of the hotels in Port Harcourt where one of the young women was killed, was however discharged and acquitted by the judge, following the failure of the prosecuting lawyer to link her to the crime.

The lawyer to David-West, Vincent Chukwu, in his plea of allocutus on behalf of his client, begged the court for leniency on the grounds that his client was a father of three young children.

However, the prosecuting lawyer, Chidi Ekeh, said David-West did not deserve any leniency and urged the court to ensure justice in the matter.

The convict had, during his arrest and parade by the police in September, 2019, confessed to killing seven young women; one in Lagos, one in Owerri, Imo State, and five in Rivers State.

Speaking outside the courtroom, Ekeh said the judgment would serve as a deterrent to other persons with such intentions of crime.

“With respect to the second defendant, she escaped by a whisker; not that the offence with which she was charged was not committed, but it was difficult to determine who exactly did it as the witnesses, who would have ordinarily provided that answer, suddenly disappeared from the state until date.

0 comments on “Rivers serial killer, David-West, to die by hanging”