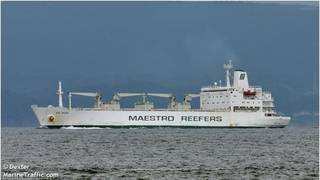 The merchant vessel ‘Ice Rose’ and a Russian warship have collided in the southern part of the Sound Strait near Denmark, the Danish Armed Forces have reported.

The country’s military did not report the Russian ship’s name and did not say whether there were any casualties.

According to the vessel tracking website MarineTraffic, the Marshall Islands-flagged cargo ship was sailing from St. Petersburg to Gothenburg in Sweden. It is currently listed as being anchored in the Sound Strait with Danish and Swedish patrol boats present nearby.

The Danish Army said they will not allow ‘Ice Rose’ to proceed until its seaworthiness is assured.

The cause of the incident is unclear. According to Danish media, there was low visibility in the Sound Strait due to dense fog. The Russian Navy did not comment on the reported collision.