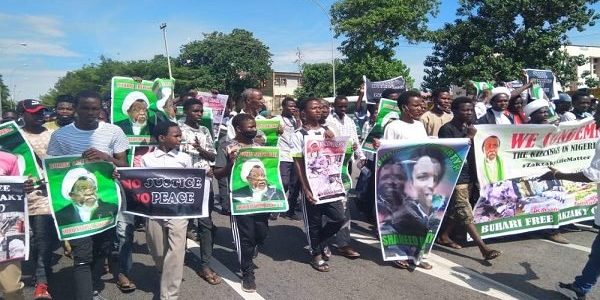 Members of the Islamic Movement in Nigeria (IMN) on Monday continued their protest in Abuja for the release of their leader, Sheikh Ibrahim El-Zakzaky.

The Shi’ites were chanting ‘free Zakzaky’ with different inscriptions in large numbers along the streets of Abuja.

Though, there was no confrontation with the police, the protest started by 3:00pm from Wuse Zone 3 under bridge and ended at Market for for just 15 minutes.

The Shi’ites have been demanding for the unconditional release of their leader, Sheikh Ibrahim El-Zakzaky and his wife, Zeenat who are currently detained by government in a correctional facility in Kaduna State.

A top member of the Academic Forum of the IMN, Abdullahi Musa, who spoke to our correspondent on the protest vowed that their actions will continue until their leader and his wife are released.

Musa said: “The protest is for the freedom of Shieikh El-Zakzaky and his wife. Most especially the fact that he is sick and the authorities are doing nothing about his health.

“We also use this medium to renew the call for the immediate and unconditional release of our leader Sheikh Ibraheem Zakzaky and his wife who are currently detained at the highly overcrowded Kaduna Prison, without access to proper medical care, especially considering that the Kaduna Sate Government has proved incapable of protecting even its highest-ranking officials.

“Though no crisis, but the police called for reinforcement. And before they will arrive the venue, the protest has ended. We will continue this action until our leaders and his wife are released unconditionally”.
It would be recalled that on July 22, 2019, a police senior officer, DSP Usman Umar as well as a reporter with the Channels Television, Precious Owolabi were killed during a free El-Zakzaky protest at the Federal Secretariat in Abuja.