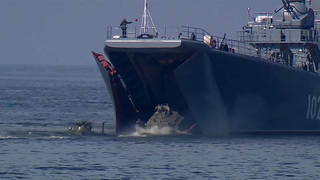 Western pundits often speak of President Vladimir Putin’s fondness for surprise moves – tens of thousands of Russian soldiers could likely confirm that after completing a four-day check of their ability to deploy when called upon.

Troops from the Southern and Western military districts, Marine infantry of the Northern and Pacific Fleets, and some Airborne units were all involved in drills ordered by Putin between July 17 and 21. In all, over 150,000 service personnel took part. The assignment also involved around 400 aircraft and over 100 warships and support vessels.

A total of 56 separate exercises of various degrees of intensity were held at 52 training ranges as part of the combat readiness check.

According to the Russian Defense Ministry, as reported by TASS, the inspection was designed to assess the military command centers’ ability to ensure military security in the country’s southwest where terrorism-related threats persist. The chiefs also wanted to assess the preparedness of troops and forces for the upcoming Kavkaz-2020 strategic command and staff exercise.

Deputy Defense Minister Colonel-General Alexander Fomin said at a briefing on Monday that “the troops’ surprise combat readiness check is a training measure and is not aimed against other countries.” He specifically pointed out that it was not related to the situation on the Armenian-Azerbaijani border, where there have recently been clashes.