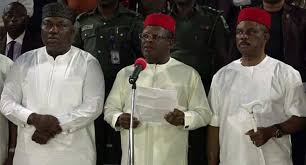 Governors of the South-East say they will further engage the Nigeria
Centre for Disease Control, to scale up testing for Coronavirus
pandemic in the region.

This is contained in a communique issued by the Governors at the end
of their meeting at the Government House Enugu.

The Governors directed that all the people of Igbo extraction living
outside Igbo land should obey all COVID-19 orders, including
presidential directive on Inter-State movements, World Health
Organization and Nigeria Centre for Disease Control hygiene practices,
presidential task force and directives of the South East Governors, as
well as directives of all the Governors where they reside.

On Community Policing, the South-East Governors requested the
Inspector-General of Police to revert to the initial agreement he had
earlier with them on Community policing composition during his last
visit to the zone, to ensure the implementation of the initiative in
the South-East Zone.

According to the Chairman of South-East Governor’s forum, Mr Umahi who
read out the communique, the forum agreed that all Houses of Assembly
in the South-East States should commence the process of enacting State
security laws in line with the South East Joint Security Programme.

The Governors agreed to set up committees in various states of the
South East to work with the Federal Government, World Bank, Central
Bank of Nigeria and Nigeria Sovereign Investment Authority in their
various programmes lined up to revamp the economy, especially in the
areas of agriculture, Small and Medium Enterprises and solid minerals.

The Governors also agreed to hold a meeting with the Group Managing
Director of the Nigeria National Petroleum Corporation, NNPC, on the
issue of linking South East State capitals with gas pipeline programme
of federal government, which is running from Imo to Lagos State.

They commended President Mohammadu Buhari for the pace of work on the
Akanu Ibiam International Airport and Second Bridge across the River
Niger and assured the people of the South East that with the progress
of work on the Airport, it will soon be re-opened.