South-East Govs should send back Almajiris imported to East ― Ezeife 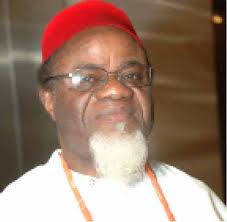 A former governor of Anambra State, Dr Chukwuemeka Ezeife has tasked South-East governors to do everything within their reach to ensure that the Almajiris that were taken to the area especially to the South East are sent back.

The former governor said that the Almajiris posed a great risk to the South East and might not find it easy to survive and could die of starvation as they do not have any known trade or business to sustain themselves.

He wondered how the Almajiris managed to enter the South East when there was lockdown and closure of boundaries by many state government.

Speaking exclusively to Vanguard in Abuja, Dr Ezeife said, “We have the closure of state boundaries, meaning that nobody can go from another state to another. We also have curfew meaning that travelling by night is out of the question, yet people are moving in thousands.

Speaking exclusively to Vanguard in Abuja, Dr Ezeife said, “We have the closure of state boundaries, meaning that nobody can go from another state to another. We also have curfew meaning that travelling by night is out of the question, yet people are moving in thousands.

“I think it is condemnable. Now I have sympathy for the Almajiris but they are not responsible for what they are doing, they didn’t hire any vehicle, some people are organizing them and sending them to the South.

“This comprehensive corruption that enables people to move to anywhere no matter the curfew, no matter the blockade, it is very dangerous. Well, let me tell you what I feel. Jesus Christ said we should love our neighbours as our ourselves. ”

I should ordinarily love almajiris if they become my neighbor, but some people were responsible for producing almajiris. Those people who gave no education, no training, nothing to survive with to human beings who they call almajiris, they should take responsibility and keep the almajiris where they grew up and pay the price for making human beings useless.

“I think we should get the Imams from the North or the East to talk to them that ultimately we want them to be useful to themselves. They can if they like to become helpers on the farm and they will be made to survive with the food from the farm.

But if it is just a matter of they go there and begin to run around, it’s not possible. Our governors have to wake up, I don’t mind what it will cost them, the governors can help as they go to the North and find ways of helping to convert them to economic being.”