Sowore out of hospital, says ‘Police lied, I was shot’ 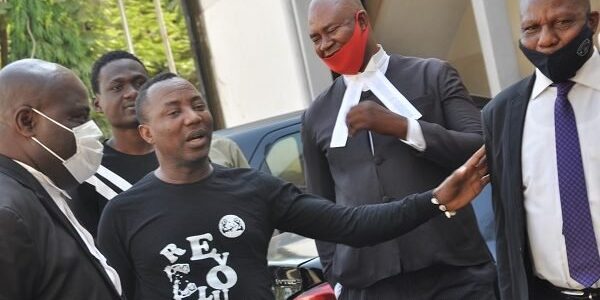 The convener of the #RevolutionNowMovement, Omoyele Sowore, has narrated how he was shot by a policeman during a rally in Abuja on Monday.

While speaking after being discharged from the hospital on Tuesday, Sowore said claims made by the police that no one was shot at the rally were false.

The Police Command in the Federal Capital Territory had claimed that Sowore was not shot.

The Police Public Relations Officer in the FCT, ASP Mariam Yusuf, in a statement, said “there is no record of such incident”, noting that police officers professionally restored calm at the Unity Fountain, venue of the protest.

But Sowore noted that apart from shooting him, the police officers attempted to scare protesters away so that they would not rescue him.

He said, “Femi Falana’s ASCAB invited us to a protest against growing insecurity in the country. I left home alongside other friends. Upon approaching the venue, we received intelligence that the police had locked the gate.

“We explained to them (police officers) that it is within our rights to protest. We told them that it was wrong to shut the gate of the venue against us but they refused. We reached the Commissioner of Police. He responded that he had no hand in it.

“When I looked back, I discovered that between three and five trucks loaded with police officers had arrived at the scene. We started singing solidarity songs and began to stream live on social media. From nowhere, a policewoman came and approached me with a federal riot gun.

“It is used in shooting projectiles or teargas. It is not meant to be used to shoot persons. At such a close range, she looked at me and said ‘Sowore, you are the one that is here’. She shot at me. I started to bleed. I noticed that blood was running underneath my trousers. I couldn’t walk again.

“Upon being on the ground, she instructed her men to shoot their teargas in our direction, apparently to prevent people from saving me. But the two men beside me rushed me to the hospital. On our way to the hospital, I discovered that my thigh was swelling and expanding.

The activist raised the alarm that this is the third time that police attacked him.

On one of the occasions, Sowore said a policeman headbutted and broke his nose.

“I have seen some pro-government narratives. This was the same thing that the government said when the DSS wanted to abduct me in court The senate investigated but after finding out the truth, they could not release the outcome. This is the third time they are sending police to attack me.”

0 comments on “Sowore out of hospital, says ‘Police lied, I was shot’”