Syria blasts Turkey as ‘sponsor of terrorism’ in UNGA address 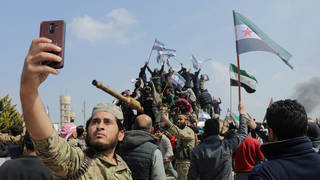 Damascus has lashed out at Ankara during a speech before the UN General Assembly, accusing the Turks of occupying swathes of Syrian land and creating a breeding ground for terrorists.

He singled out Turkey as a sponsor of terrorism in Syria and the surrounding region, and accused Ankara of committing “a war crime and a crime against humanity” by restricting civilian access to water in several towns controlled by Turkish forces.

The top Syrian diplomat also alleged that Turkey facilitated the “entry of tens of thousands of foreign terrorists into Syria and still offers all forms of support to Jabhat al-Nusra and other terrorist organizations.”

He went on to denounce the “US and Turkish forces’ illegitimate presence” in Syria and vowed that his country would “not spare any effort” to end the occupation of its territory.

Muallem was similarly defiant when discussing the Israeli-occupied Syrian Golan, and stated that Damascus will do everything it can to “restore” its sovereignty over the territory.

In his own address before the General Assembly, Turkish President Recep Tayyip Erdogan said that the conflict in Syria continues to pose a threat to regional security and stability, noting that his country hosts four million Syrian refugees displaced by the war. He claimed that Turkey has played a decisive role in the fight against Islamic State (IS, formerly ISIS) and that he wanted to see a “permanent solution” to the situation in Syria.

Turkey has been a major player in the Syrian conflict and has launched military excursions into the country under the pretext of hunting down Kurdish militia groups, the PKK and YPG, which Ankara considers terrorist organizations.