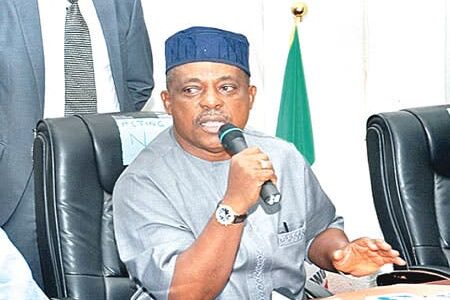 Against the defection of Governor Dave Umahi of Ebonyi State to the All Progressive Congress (APC), the National Chairman of the Peoples Democratic Party (PDP), Prince Uche Secondus, has said that the party will not succumb to blackmail.

Giving his opening remark at the 90th National Executive Committee (NEC) meeting of the main opposition party in Abuja on Thursday, he said the exit of the governor has not affected its strength in the state and the South-East.

The party boss pointed out that all members of the PDP in the National Assembly remain in the party, informing that report available to him affirmed that many Ebonyi state government officials have resigned from their posts because they are unwilling to join Umahi in the APC.

Recall that before announcing his defection from the party, Umahi had made some demands of the PDP including a commitment to zone the 2023 presidential ticket of the party to the South-East.

Meanwhile, the PDP has observed that the comment by President Muhammadu Buhari on the defection of Umahi to the APC smacks of dereliction of duty and “political scavenging” by the Buhari Presidency.

It said the Presidency statement also exposes how the nation was brought to her knees as compelling demands of the office are made to suffer while the Presidency gloats over trivial issues.

The party described President Buhari’s action “in abandoning the responsibilities of his office, at this critical time, to focus on the personal partisan adventure of an individual, as a misplacement of energy.”

The party said the development further exposes Mr President’s “incompetence and poor understanding of the tenets of leadership, statesmanship and expectations of his office.”

The PDP noted that is appalling that the Buhari Presidency is showing more urgency in commenting on political adventures rather than expressing concern on the reported kidnapping of 12 senior police officers by bandits.

The party observed that if President Buhari had used the same urgency he displayed in commenting on Governor Umahi’s defection to address the issue of police brutality, the crisis situation, death, arson, destruction of public and private property witnessed in the aftermath of the #EndSARS protest would have been averted.

The party added: “Indeed, if Mr President had shown similar urgency towards the demand for the rejigging of our national security architecture, we would have averted the escalated insurgency, kidnapping and bloodletting ravaging our country today.

“In the same vein, if President Buhari had used the same urgency to respond to the call to reorganise his economic team, end the corruption in his government as well as address the frightening upsurge in unemployment under his watch, our nation would not be in this sorry state as the poverty capital of the world.

“President Buhari has indeed shown that he has no time for governance; completely out of sync with the social and political reality in our country and disconnected from the expectations of Nigerians on his office, particularly at this trying time.”

The party urged President Buhari to “wake up and show more seriousness to the duties of his office instead of engaging in the personal political enterprise of individuals.”

The PDP, therefore, counselled President Buhari’s handlers to “stop ridiculing his office by making him a butt of joke in the public space.”