Unfinished Greatness – Towards a more perfect union in Nigeria: An overview 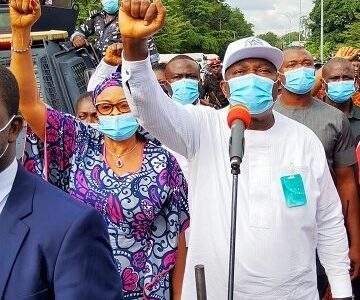 Within the past decade, especially since 26 January, 2010 when I wrote the article:  ‘More Case For An Urgent Restructuring’, not to go all the way back to 2006 when I started writing for  this stable,  then called Comet, I have written more than 25 articles canvassing restructuring.  For two main reasons, however, I believe that Dr Fayemi’s recent Kaduna lecture must have been more impactful on restructuring than my over a million words, put together, on the subject. First, in Nigeria, columnising is more like a dialogue with the deaf, but  much more importantly, the governor, by giving that lecture, where he did, and to that audience, was like daring the lion in its lair.

I say this because in spite of restructuring being more of an anathema to the Northern power block, he still spoke so lucidly, and forthrightly, holding nothing back. Instead, he copiously laid down the  ingredients of what a genuine  restructuring of Nigeria should entail. His candour, I suspect,  must be the reason His Eminence, the Sultan, Muhammadu Sa’ad Abubakar, CFR, described him as an adopted son of Sir Ahmadu Bello who, not only spoke impeccable English, but was  acclaimed as a man of truth.

Incidentally, this happens not to be Governor Fayemi’s first contribution to the now renewed debate on  restructuring. Not too long ago, he informed the Nigerian public, through a newspaper interview, that the recommendations  of the APC’s El Rufai committee on Power Devolution has now been remitted to the National Assembly.

Expatiating  on his topic,  he said it rests on the core assumption that there was a ‘greatness’ or at least a journey towards ‘greatness’, which has remained unfinished and now requires building a more perfect union to accomplish.

What then are his prognosis for  achieving that greatness which would guarantee for Nigeria her  rightful place in the comity of nations?

He is in no doubt that Nigeria would record no development, whatever,  as long as it is not a nation, properly so called. To overcome this problem it is his view that Nigerians must resolve what he calls the “fundamental challenges” of  nation-building which inheres in “elite consensus”, without which Nigeria will, forever, remain only a country of nations. With regard to our differences, Dr Fayemi is convinced that our diversity,  if properly harnessed, could actually be a source of strength for the country and help in building a virile nation.

Unfortunately, successive Nigerian holders of power have forgotten Uthman Dan Fodio’s admonition that one of the swiftest ways to destroy a country is to give preference to one particular tribe over others. In like manner, Northern leaders, some of them present at the event, have chosen to discountenance the research conducted by the Arewa Research Development Project which concluded that in the contemporary world, issues of nation-building are increasingly being centred around  rights and equality, and access to these rights without any modicum of favouratism -a fact which, unfortunately  has now ceased to be the  experience of Nigerians from certain parts of the country, even though equitable access would have  facilitated  political integration and development.

This unfairness was one of the reasons which predisposed the Nigerian youth to the #ENDSARS protest even though  alongside the sheer bestiality of that arm of the Nigerian police.

These shortcomings must have led  the lecturer into advising that “we must appreciate the responsibilities which  our destiny has imposed on us. We have to start, he suggests further,  by first conquering the demon of mutual suspicion and distrust which has poisoned our politics and subverted our will to forge the necessary consensus that is so crucial to marching confidently towards our  manifest destiny as a great nation. If we do this, he went on, we would have scaled the major obstacle to forging a great nation out of this colonial creation…”  However, to hold that all Nigerians are complicit in committing  these shortcommings,  would, in my opinion, not be true. Successive Nigerian governments, especially the military, which was almost completely  dominated by the North, as well as  the civilian Heads of government, largely coyly rigged into office by the North,  did everything to perpetuate iniquity.

For instance, while General Babangida and his North- dominated Executive council  gave Kano state 44 Local Government Areas, oil producing Bayelsa state  8, and Lagos state, with its huge port facilities, and accounting for not less than 55 per cent of the total Value Added Tax  revenue, a miniscule 20 Local Government Areas, so miserable it has been pleading, like forever, for a special grant to fix its infrastructure, being daily ruined by huge trucks from everywhere, to no avail. What then can be more iniquitous than what we have presently for structure  in Nigeria?

Under an equitable arrangement, Local Governments should be a complete state affair; indeed, a state’s most potent tool for policy implementation  and, ipso facto, for impacting its publics.

This patent inequality, amongst several others, is why many doubt that a Nigerian leader of Northern extraction can ever sincerely want Nigeria restructured from its present, highly unproductive one.

As we all know, several half -hearted attempts have been made to restructure Nigeria but, as should be expected, nothing concrete ever came out of  them  simply because they were actually designed to fail.

Beginning with the 1999 constitution which Chief Bisi Akande once, very aptly, described as “Nigeria’s greatest misadventure since Lugard’s amalgamation of 1914, breeding  and protecting corrupt practices and criminal impunities in governance”, through Obasanjo’s one ups man ship, which was  aimed at making him a life President, which he denies,  to Jonathan’s opportunistic 2014 Constituent Assembly which was designed to guarantee his re -election with help from our highly regarded Afenifere elders  all came to nought since they were, in reality, efforts in self help. None was aimed at making a better nation, out of Nigeria.

How then did Gov Fayemi frame what he described as “building a nation, where peace and justice shall reign”?

“Imperatives for a ‘More Perfect Union”, he called it, and declared, unapologetically, that “the path to nation-building is peace, the path to peace, he said, is justice, and the path to justice is equity and inclusion” –  everything Nigeria currently lacks.

It is his opinion that through the #ENDSARS protests, the youths of Nigeria were saying that the older generations have failed them by not creating a system that supports their hopes and aspirations. Rather, they feel pushed to the fringes of the country’s socio-political and economic structures.

He  then comes to the heart of the lecture and, here, I shall have to quote him, mutatis mutandis, as a way of concluding this piece.

Said Fayemi: “The more contentious parts of our quest for a more perfect union revolves around devolution of powers – that is, the re-allocation of powers and resources as well as reconfiguring the country’s federating units. Long years of military rule, according  to him, has produced a concentration of powers and resources at the centre to the detriment of the federating units. The 1999 constitution, for instance, was hurriedly put together and  so was not a product of sufficient inclusiveness. He believes that reconfiguring Nigeria should majorly concern what items should remain on the exclusive legislative list and which ones should be transferred to the concurrent and residual lists. Others should  include the derivation principle; fiscal federalism and revenue allocation; land tenure, local government creation etc. Genuine efforts, he said, should be exerted in strengthening the sub-national units in the re-allocation of powers and resources.  This means that assignment of functions that would be consistent with a devolved but strengthened federal system must have a short, exclusive federal list to include defence and security, macro-economy, foreign affairs, customs and excise and joint responsibility in certain functions currently assigned exclusively to the federal government (internal security and policing) and primary responsibility of the sub-national governments in respect of the other functions in the second schedule of the 1999 constitution whilst the remaining powers devolve to states.

The position of the Nigerian Governors’ Forum, which he chairs,  on revenue collection and sharing, is that the sharing formula should be reviewed in favour of the states, as follows: 42% to states, 35% to the Federal and 23% to Local Governments. It is  also his opinion that reconfiguring Nigeria has now become a sine qua non for purposes of  peace and development. In support of this, he quoted, extensively, as follows from the former INEC Chairman, Professor Attahiru Jega: “By working hard, rationally, and scientifically, to remove the distortions in our federal system, we would have a better functioning federation with only states as  federating units; with conscious commitments  to zonal cooperation among contiguous states, with local governments subsumed under states…with substantial devolution of power, responsibilities and resources from the federal government to the states, and with mechanisms of ensuring greater equality of opportunity for all and affirmative action for inclusion of the marginalised, minorities and groups discriminated against in the country.

What I believe remains to be added is a plea to those whose opposition to restructuring presently seems cast in stone, to put nation above all ethnic, and regional consideration, and see Nigeria blossom, beyond their wildest expectations, to the benefit and admiration of all. Every part of this country is so blessed of God that, with hard work, meticulous planning, and far less corruption, no part will lack.

0 comments on “Unfinished Greatness – Towards a more perfect union in Nigeria: An overview”