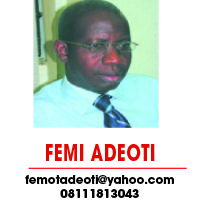 It is given. Nigeria is more divided now than ever before. And sadly enough, we are carelessly taking it for granted. What a huge burden of pity!

We are not in any way bothered that our survival and cohesion are at great risk and in serious jeopardy. We behave as if the geographical make-believe called Nigeria could pack up one day. We do not care a hoot to sustain it.

No stake, no commitment. Not even the self-inflicted 30-month bloody Civil War tore us this apart. We failed woefully to pick useful lessons from that dark part of our ugly history.

Instead we opt to dastardly concentrate on the negatives. Our strength is being weakened as each day passes. This is more than a war situation. And we are losing out rapidly as a nation state.

That is the mess we find ourselves. Yet we treat the critical situation with utmost levity and flippancy. We are all culprits, both the leadership and the followership. We have our own rations of blame to share. And we have to contend with that.

Tragically, we pretend we are helpless. Only the very few blind and covetous among us would see things quiet differently. They see these perilous and hard times as normal. They perceive awkward normalcy in the abnormality.

Thank God, we have the exact opposite on the other side of the divide. They are faithful to our cause. They steadfastly stick to their guns. They choose to be sincere despite all known and unknown odds. But they are in minute minority.

They could easily pass unnoticed. Still, they exist to bail us out in times like this. We forever cherish their words of wisdom and reason. They are the ultimate saving grace in difficult periods like this mess. They counsel and encourage us on the positive side. And we remain eternally grateful to them.

One such recently came out of our wilderness. It was a strong voice crying loud and clear. It did not mince, miss or mix words. It talked straight to our predicament. You could not pretend not to hear it.

The voice? Dr. Yemi Farounbi is it! Still wondering? Okay, Farounbi is an accomplished administrator and broadcaster. He is Nigeria’s former ambassador to the Philippines.

On Tuesday, May 12, 2020, he shouted to high heavens. He could no longer swallow what he was seeing. He could not hold back any more. Keeping quiet would be a monumental risk of all time. He was not cut for that.

But he could comfortably expose the evildoers. And they are legion in our midst. He did just that perfectly, caring not whose ox was gored or even brutally bruised.

He reasoned aloud in Osogbo, Osun State. The sudden “invasion” of southern states by a large number of northern youths could be motivated by factors beyond the COVID-19 crisis. Yes, it could be anything more than the pandemic.

He was on spot. He opined rightly and correctly too, it could be a plot to conquer the South and break its population. He poured out from the depth of his heart. He was sincere:

“It is an unfortunate situation for the almajirai in this period to invade the South. If they were not wanted in the North, why would they think they would be wanted in the South that is culturally different in every way from the North where they are being expelled?

“This move is a plot to conquer the South to break its population, to take over its green land and at the end of the day establish Ruga that their people and government have rejected and penetrate the people of the South-West in a way that they will now wield the political monopoly that will dominate Nigeria.

“Everyone in the South-West should rise and those in the North who love Nigeria must prevail on those behind the invasion of the almajirai. The invasion is undesirable, unreasonable and if the people of the South should rise to defend their land, the result on Nigeria will be unpalatable.”

Farounbi wanted something done fast. There is no time to waste. We are running critically against time. That is not pleasant enough, it is dangerous. And the onus heavily fell on Amotekun, the South-West regional security outfit. He was not afraid to say it:

“This is the first test of Amotekun to defend the territorial integrity of the South-West. I hope the governors of South-South and South-East are doing a similar thing to prevent invasion. I also expect the governors to prevail on the police.

“They should use Amotekun, local vigilantes and other armed men to protect their lands; otherwise, they would have nothing to hand over to their children in the future.”

There, he successfully closed his case.

Since he spoke, nothing concrete has changed. No known concerted efforts from the so-called Federal Might to halt the hideous trend. The unholy exodus continues unchecked. It is growing like a wild harmattan fire. Spreading to every part of the South and the Middle Belt with reckless abandon.

Those who ought to act are looking the other way. They knowingly refuse to see what we see. We see a clandestine in this “unjahly” movement of almajirai. In fact, we suspect official complicity. It is a grand conspiracy against the South and the Middle Belt.

That reluctance and complacency of the Federal Government and its agencies must not be ignored. No, we won’t sweep it under the carpet either. We won’t keep quiet; it is not in our character.

That is why Chief Goddy Uwazurike was bold to quickly point out: “Former President Goodluck Jonathan had built special schools for the almajirai, but this government has abandoned the scheme.” Whatever happened to the numerous nomadic schools being erected since the time of Prof. Jibril Aminu as Minister of Education!

Uwazurike is a former president of Aka Ikenga, an association of Igbo professionals. He is certainly not done yet: “The All Progressives Congress (APC) even made it a campaign issue in 2015.

“The almighty almajiri kids were prominent voters in 2015 and 2019, including eight-year-olds.” He says the exodus “is akin to a biological warfare… Somebody is delicately sending the weapons of biological warfare down South.”

He exposed another frightening discovery: “There is another invasion just noticed. Able-bodied men aged between 20 and 35 are smuggled by food-carrying trucks to Igboland. They speak little Hausa and a lot of French.

“They are normally hidden underneath bags of tomatoes and pepper, yam tubers and cattle. They do not know their destinations and occupations.”

These things are happening with “strict” inter-state restriction securely in place. These couldn’t have been without active connivance, collusion and collaboration with security agents.

We insist this almajirai overflow down South is everything evil. This is the exact opposite of the Mosaic Movement of Jah People. It is its radical departure.

This one is patently loaded. It is jihad-inspired; jihad-propelled. We are not in the 19th Century. So? It is not meant for us.

Chief Obafemi Awolowo saw this long ago and early enough; he was prophetic about it. And he did give a stern warning. His ardent disciple, Chief Ayo Adebanjo, re-echoed:

That naked reality is here with us.

0 comments on “Unholy exodus of almajirai”