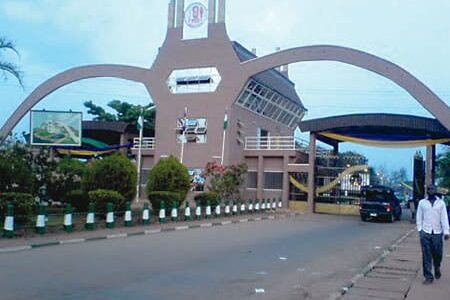 Four months after his wife was killed due to the alleged recklessness of policemen, a 62-year-old lecturer of the University of Benin (UNIBEN), Dr William Okotie painted a graphic picture of how his wife died.

Dr Okotie, a lecturer in the Department of Institute of Public Administration who petitioned the Edo State Judicial Panel of Inquiry for victims of SARS, demanding for compensation spoke on Monday at the sitting in Benin.

The wife, Dr Stella Okotie of the same department was knocked down by a commercial bus driver, who lost control, last July while standing in front of UNIBEN gate when some policemen struggled the steering wheel of a minibus with the driver.

The widower confessed that life has been so difficult for him and his family since the sudden death of his wife due to the recklessness of the men of the Nigerian Police at the school gate.

Mr Okotie who showed up at the Edo State Judicial Panel of Inquiry for victims of SARS and Related Abuses in the company of his son told the panel that the death could have been avoided if the police officers were not struggling the steering with the minibus driver.

“We don’t know what happened between the driver and the policemen. We only saw the officers of the police dragging the steering with the driver until they hit my wife.

“My son and I were standing alongside my wife, (now deceased) when it happened,” he said.

Okotie disclosed that the family was done with the burial but needed compensation from the government to be able to take care of the family and settle debt incurred from the burial expenses.

The university don confessed that it has not been easy taking care of the family as he has to battle with how to handle household chores and dress the children up for school.

While in tears, he said: “Since it happened, it hasn’t been easy with us. It is not something one should experience; I have been doing the cooking, school runs.

“Two police officers dragged the steering with the driver of the minibus which veered off the road and knocked her down.”