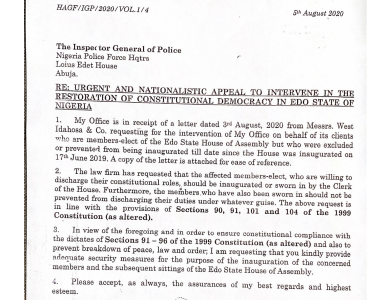 The Minister of Justice and Attorney General of the Federation Abubakar Malami has ordered the Inspector General of Police to provide security for the 17 Edo All Progressives Congress (APC) lawmakers.

In a letter dated August 5 based on a petition to his office by Idahosa-West Chambers, Malami said the security measure is necessary to prevent breakdown of law and order.

The 17 lawmakers backing All Progressives Congress (APC) Governorship candidate, Pastor Osagie Ize-Iyamu, have been locked in a battle to access the Edo Assembly complex on Ring Road, Benin with seven lawmakers loyal to Governor Godwin Obaseki.

the letter to Malami, the Chambers, which represents the 17 APC lawmakers, argued Obaseki has left for the Peoples Democratic Party (PDP) and should not control the Assembly.

It said “it is legally and politically incorrect to allow a party with minority of the House of Assembly to keep out 17 members-elect of the majority party.

“This is unconventional and very strange to the legislature worldwide. Above all, it sends a wrong signal to the Nigerian public that votes do not matter and that Governors are above the provisions of the Nigerian Constitution when carrying out their acts or omissions.”

The Chambers added the newly inaugurated 17 lawmakers should be allowed to carry out their constitutional functions without let or hindrance.

It appealed to Malami to invoke Section 150 of the 1999 Constitution to arrest the breakdown of law and order in restore “ a functional House of Assembly.”

Malami, on the strength of the petition, urged the Police Chief to provide security for the inauguration of the lawmakers and their subsequent sittings.