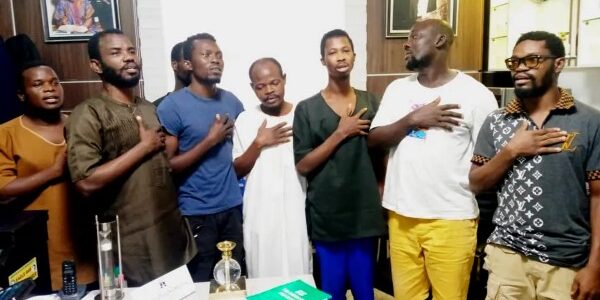 Almost two months after they were detained, the Department of State Services, DSS, on Monday, released eight out of the 12 persons it arrested at the residence of Yoruba nation activist, Sunday Adeyemo, popularly known as Sunday Igboho.

Briefing newsmen in Abuja, their lawyer, Mr. Pelumi Olajengbesi, disclosed that DSS declined to release four others due to “some legal technicalities”.

“Among those that were released included two out of the four persons the DSS opposed their bail application.

“While six, out of the eight persons their bail was not challenged, were also released to us.

“We don’t want to accuse DSS of bias at this stage. However, we will go back there tomorrow (Tuesday) to ensure that those still in detention are released.

“Our next step will be the commencement of legal process on behalf of the two persons that were killed at Chief Igboho’s house.

“We will pursue this matter to its root”, Olajengbesi added.

The DSS had earlier declined to release any of the 12 detained persons it arrested on July 1, despite a ruling of the Federal High Court in Abuja that had on August 4, granted them bail in the aggregate sum of N80million.

The court, in a subsequent ruling on August 24, struck out a fresh motion the security agency filed for permission to further detain four out of the 12 detainees.

DSS had insisted that the four detainees- Amudat Habitat Babatunde, Abideen Shittu, Jamiu Noah Oyetunji and Bamidele Sunday- were deeply involved in Igboho’s alleged criminal activities, and were “suspected to be stock piling arms to take over the South Western states in the country”.

While opposing their release on bail, the DSS, through its lawyer, Mr. I. Awo, said it believed that four of them would escape from the country like Igboho, once released from detention and would not make themselves available for further investigation or trial.

It told the court that their principal, Igboho, is currently standing criminal trial in Benin Republic, after he was declared wanted in Nigeria.

“Rather than to turn himself in, he decided to flee this country. There is no guarantee that these four Applicants will not follow same if released on bail.

“There are credible information on how friends, family and associates of these same four Applicants are making contacts with potential witnesses identified by the DSS.

“Some have been pressurized not to turn up in an event that they will be tried.

“These four Applicants will jeopardize ongoing investigation if realeased.

“Finally, it is our submission that once investigation is concluded, the Respondents will not hesitate to charge them to court.

“At that point, we may concede to an accelerated trial. We do not want to take for granted the safety of our potential witnesses.

“We therefore ask this court to deny these four Applicants bail, in order not frustrate this process”, counsel to the DSS added.

Arguing that denying them bail would be in the interest of national security, the DSS, sought permission of the court to further detain them for another 14 days to enable it to conclude its investigations.

The court, in a ruling by Justice Obiora Egwuatu, dismissed the application.