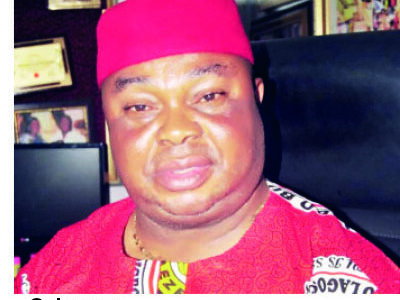 Following economic loss being experienced by the business community and other stakeholders, in the South East, as a result of insecurity ravaging the region, president Ohanaeze Ndigbo Lagos State, Chief Solomon Ogbonna , has urged  South East Governors’ Forum to employ Information Communication Technology (ICT) to curb the menace.

He speaks on this and other issues of national interest affecting the region with Brown Chimezie.

What is your view on security situation across the country, with particular respect the South East?

The insecurity is at an alarming level and demands the contribution of all patriotic Nigerians to stop the crisis. As par the South East, I believe the insecurity is caused by some disgruntled people and some infiltrators from other zones of the country. By and large, I condemn all acts of violence at any part of the country, as I call on the perpetrators to stop; because the long arms of the law will definitely catch up with them.

What do you think is the reason for the violent crisis?

Many factors are responsible for the upsurge in criminal activities, chief among those, is unemployment. The saying goes; an idle mind is the devil’s workshop. So, some unemployed people take to criminality as ways of earning their living and some indulge in violent crimes. Bad leadership and abuse of power by some political leaders and some security operatives attract negative reactions from some disgruntled members of the society. Some vent their anger through attacks on public property and security operatives. Most criminals are cowards, and those cowards unleash violent acts on soft targets, innocent citizens at remote villages and locations.

Suggestions on how to stop violent crimes across the country

I could have suggested the installation of CCTV at all nook and crannies of the country, but the hindrance to that is insufficient power supply across the country. If there is no light to illuminate the operating area of a particular CCTV at night, it becomes useless. Nonetheless, it is still important to install CCTV at some strategic locations and ensuring power supply to those locations at night. Government should create enabling environment for businesses to thrive, so these businesses could create jobs to absorb the teaming unemployed youths. Quite, the police force seems overwhelmed by the criminals, thereby prompting the involvement of the military; but we should minimise the military involvement in this democratic setting. Furthermore, the whistle-blower policy should be extended to violent criminal gangs; by earmarking rewards for information leading to arrest of members of criminal gangs. There should also be social welfare packages for the indigent and unemployable members of the society.

How do you score the performance of Igbo leaders in the light of the insecurity situation in the South East?

Igbo leaders including the political, religious and socio-cultural are doing their best to arrest the ugly situation. We are reaching out to various opinion leaders and stakeholders across the country to assist in whatever way possible to stop the violent crimes. Assessing the situation so far, the moves are yielding positive result. However, the score is still on the average, as we need to do more.

What is your advice to Ndigbo at home and in diaspora?

We should mind our utterances and avoid making inciting statements. I call on all Igbo to think towards find solution to the insecurity and not fuelling it. Ndigbo should cooperate with both our political leaders and security operatives by giving vital information about criminal activities around their areas. Those in diaspora should not believe everything they read in the social media, as most of those newsfeed are fake. They should verify every information before drawing conclusion. For Igbo leaders at various levels, they should focus on offering good guidance to Ndigbo, while political leaders especially governors should provide the citizenry with dividends of democracy. At Igbo fora and meetings, leaders should stop flaunting their profiles and wealth, but discuss ways to tackle the many challenges facing our zone. Ndigbo should appreciate our culture and tradition, and part of the culture is sharing vital information that enhances societal growth.

One of the flashpoints in South East is your home state of Ebonyi. What are the leaders doing to arrest the situation?

The governor, Mr. Dave Umahi and other political leaders are doing their best to secure the lives and properties of Ebonyians. The Ebonyi government is equally doing great in the areas of infrastructural development. However, the unemployment level in the state is just as high as in many other states of the federation. But some philanthropists, the likes of Dr. Ifeanyi Chukwuma Odii, are helping to bridge the employment gap by empowering some unemployed youths with skills and funds to establish businesses of their own. So, Dr. Chukwuma Odii and his likes are doing great in assisting Ebonyi people and Ndigbo through funding of businesses. I appreciate them and urge other wealthy Ebonyi people to assist in solving the unemployment problem in our state, by providing skill acquisition centres and funding for young entrepreneurs.

As Igbo leader in Lagos State, how do you assess the security situation in the state?

Igbo and many other tribes and nationalities resident in Lagos State feel very safe. Though, there are isolated cases of criminality in some parts of the state, but it is not as explosive as in other parts of the country. In fact, South West is somewhat quieter than other parts of the country. In Lagos State, the helmsman, Governor Babajide Sanwo-Olu, is on top of the security situation and doing everything right to secure the lives and properties of Lagosians. I give kudos to him and pray God will continue to direct his administration to maintain peaceful co-existence of the various people in the state.