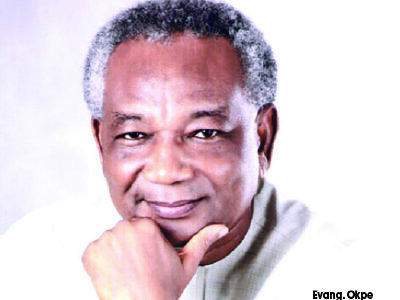 Evangelist Tony Grey Okpe was a senatorial aspirant for Imo East in the 2019 general election under the umbrella of the All Progressives Grand Alliance (APGA). But when his bosom friend, Senator Hope Uzodimma was given the All Progressives Congress (APC) governorship ticket for Imo State, he dumped APGA and joined the APC, where he became a director in the Hope Uzodimma  Campaign Organization for the 2019 general election.

Evangelist Okpe, an apostle of good governance known for speaking truth to power, in this interview said that the opposition in Imo State is merely distracting the governor from doing the job that the good people of Imo elected him to do.

According to him, there are two types of opposition in Imo: ‘the heart broken Peoples Democratic Party (PDP) members and the Anayo Okorocha Action Alliance faction in Imo State APC.’

He said that they are causing unnecessary distractions to Uzodimma, adding that there is time to play politics and time to governor. He also spoke on other issues. Excerpt:

How do you see Hope Uzodimma’s governance of Imo State?

Senator Hope Uzodimma was sworn in as the governor of Imo State in January 2020. Immediately after he was sworn in, he was dragged to the Supreme Court for review. The review process took about six weeks. As soon as the review was over, the governor swore in his commissioners and advisers. About a week later, the Coronavirus lockdown started. Governance all over the world came to a stand still for about four months. Lock down was lifted about three months ago nationwide. So, the governor has to surmount the challenges that has confronted him and has started settling down to govern. Consequent upon the negative narratives and widespread falsehoods laced with deep-seated animosity and cynical intention to malign and discredit the government of Senator Hope Uzodimma, not very few people had been deceived and hoodwinked into believing that the shared prosperity government of His Excellency is not a performing government. The animosity and cynicism of some minority section of Imolites towards the government ironically had nothing to do with his performance in office, rather the venting of  frustration against the brevity of the previous administration of Emeka Ihedioha. Senator Hope Uzodimma had shown tremendous capacity in the administration of the state. His policies are people-oriented. This is a government that repealed the self-serving law that provided for life pensions to elected former governors and Speakers of the House of Assembly. What else could have portrayed the image of the governor as a selfless leader than this? Senator Uzodimma rather works the talk than talking the talk. Cynicism is a social disease that beclouds people’s sense of judgment and blindfolds them from the reality of time. Those who suffer from this general air of malaise tend to live their lives in the past, while the rest of the world move on.

What did former Governor Rochas Okorocha do for Imo State?

Well, Anaya Okorocha was the governor of Imo State for eight years. But his eight years was the years of locust. Okorocha destroyed everything on his path. He was like a bull in a China`s shop. The only project that Okorocha did in Imo State that would stand the test of time is the chapel that he built in Government House, Owerri. Every other project that he did was an avenue to siphon funds. Look at the roads he built while he reigned for eight years. Rain washed them away after one year they were constructed. Look at the IICC Centre he built with more than N2 billion; it is like a rag-tag building. In fact, Okorocha could not build a motorable road to his own house in his village. I think that Anayo Okorocha ought to have been in Kuje prison in Abuja for a long time because his crime against the good people of Imo State is unforgiveable. So, when I see Okorocha gallivanting and speaking in public, I weep for this nation because in a normal clime, Okorocha would have been in a cage in prison where he belongs.

I speak as an APC  stakeholder in Imo State  and a member of the governor`s campaign council, I don`t speak for the government. It is important that I make this clear. Let me say again that Anayo Okorocha  set Imo State 10 years backward. About two weeks ago, the leadership and traditional rulers from Ideato nation came on a solidarity visit to Governor Uzodimma. During the visit, they begged the governor to help to develop their area. They also told the governor that a son-in-law is better than a brother. There is no electricity in the entire Ideato nation, which is Okorocha`s immediate constituency. There is no pipe-borne water and no roads. Ananyo Okorocha was governor for eight years, but could not develop even his own community. So, right now, the governor is under enormous pressure from every local government  area in Imo State for roads to link their local governments to the capital. I personally visited some constructed roads by Governor Uzodimma. These include Dick Tiger Street, Chukwuma Nwoha Street, where underground tunnel is being laid to channel erosion water to Lake Nwaebere. I visited Port Harcourt Road that was not motorable for 10 years now. The other roads that I visited include World Bank area of the state capital. Massive reconstruction of roads are also going on in the state. Governor Uzodimma  has also made great strides in the critical areas of security, infrastructure, civil service etc. The impetus given to the taking-off of the community policing is worthy of extolling. This outfit, when finally operational, would provide jobs to a good number of youths and also adequate security architecture that responds to the security challenges that are peculiar to Imo people.

But why are workers’ salaries and pensioners not being paid regularly in Imo under Governor Uzodimma?

Governor Uzodimma is by nature a very good man, so he has no intention of owing anybody. His life is about giving to people, so why would he now refuse to pay salaries or pensions? The truth as I understand is that the whole system was messed up before he was sworn in as the governor. There are so many ghost workers and ghost pensioners In Imo State. He wants to correct the past ills and automate the payment system so that the workers and pensioners can be paid seamlessly. I have the confidence the issue of salaries and pensioners would soon be a thing of the past. Senator Uzodimma  is a man with empathy. He would ensure that the sweat of a labourer would not dry on his body before his pension is paid, I can assure you.

You had ab initio believed in Senator Uzodimma and his governorship ambition even when many had written him off, what gave you such faith?

The Holy Bible tells us in Hebrew 11:22, that Joseph had faith in things to come and he said that the people of Israel shall depart to their homeland. He also commanded them that his bones shall be returned to Israel and it came to pass. So, all things are possible to them that believeth in Jehovah.

But many believe that Imo APC doesn’t have capable men and women to support the governor to achieve his goals?

Such belief is erroneous because there are a lot of capable men and women in Imo APC who are already doing that. I will not want to bore you with their names. But I will give few names from the three senatorial zones. The topmost on the list is Senator Osita Izunaso; he is the most upright man of our time. His word is his bond. He is in the mold of Femi Otedola in empowering people.I am a witness to his good deeds across all the local governments  in Imo State. Another good man and APC stakeholder in Imo State is Chief Martin Agbaso. He is a man of class and a brothers` keeper. He is a strong believer in Senator Hope Uzodimma`s government. I must also mention Chief Tony Chukwu, a leader and financier of our great party, APC. He was part of the battle to reclaim Imo State from Okorocha. Cosmos Maduka is also a very strong voice for APC in the state and a friend of all. He is a mobilizer of men and means. Finaly, let me mention Chief Uzoma Obiyo, who was chairman of Imo Coalition Group that battled Okorocha for the governorship ticket. His role towards the emancipation of Imolities from the reign of Okorocha  will be remembered for years to come.

Do you think that APC will remain in power in Imo State after 2023?

Why not? APC has come to stay in Imo State for at least 25 years. The reason is because Senator Uzodimma is a man of the people and he will ensure that the party becomes the only party in the state. He would build infrastructure in every nook and cranny of the state. APC administration under Hope Uzodimma  will turn Imo into another Dubai in Africa. So, the sky is not even the limit in Imo APC. I, therefore, ask Imolities to store their treasure in APC  where caterpillars and termites will not destroy their treasure.