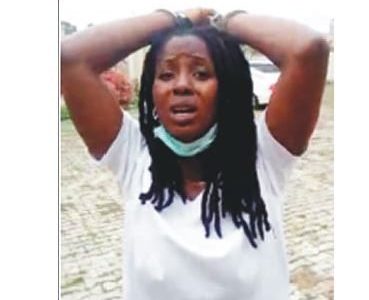 The Police have arrested three of their officers and one civilian for allegedly dehumanizing a young woman in Ibadan in  a video that has gone viral  on the social media . Arrested, according to  the Force Public Relations Officer, DCP Frank Mba, are  Assistant Superintendent  Tijani Olatunji ,Inspector  Gboyega and Corporal  Aiyedun Akeem and one Ope Owoeye.

Women lawyers are rallying round the alleged victim of the police molestation, Towobola, to enable her get justice.

The International Federation of Women Lawyers (FIDA), Oyo State branch, has offered free legal service to the 25 year old lady who was said to have been emotionally tortured  by policemen after arresting  her boyfriend for alleged kidnap.

“Investigation is still ongoing after which the Force internal disciplinary procedures will commence for the officers,” Mba said  on Friday while, Police Detectives from the State CID, Panti, Yaba, Lagos  “have established contact with the victim with assurances that justice will not only be done but will be seen to have been manifestly done.”

In the 2.20-minute video Towobola is seen handcuffed and lying on the floor as the policemen shout at her to get up.

“Stand up, stand up. I go daze you o,” one of them said in pidgin English.

One of the policemen is also heard asking  Towobola  about her sex life and mocking her.

In one instance, he said Towobola would have turned him down were he to toast her but would rather go out with a criminal.

The young girl who appeared to be in pain could only  moan.

Dressed in white T-shirt, blue jeans and white sneakers, the lady managed to get up and responds in Yoruba, begging the policemen to spare her.