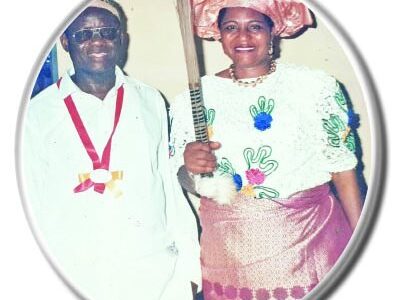 Chief Wilfred Oden Inah, now a retired permanent secretary in the federal civil service, and his wife, Chief Mrs Kosi Oden Inah, who retired as a director in the same federal civil service, have, been married to each other in the past 30 years. In this interview with JUDEX OKORO, in Calabar, the man born on September 12, 1940 and his wife spoke on their marital life experiences, challenges and offered useful pieces of advice to young couples on how to make their marriage a success. Excerpts:

All these years, God has kept two of you together as husband and wife. Could you tell us how you met before two of you got married?

Husband: It was a beautiful experience when we met; we couldn’t have thought of getting married because we are related by blood. The mother was my cousin and when she was about to pass on she said to my father’s side I trust this girl in your care. So, as time went on, it looked as if that protection I was about to give her will be given at close quarters than at a distance. However, I met her in her mother’s house at Ugep, and her mother is from Ugep. Anytime I was on holiday or on weekend, it was compulsory that I must see her. And if I didn’t, she would wonder what went wrong. In any case, she was one of those who served me when her mother was preparing food. So, she was there. I did not go to a cocktail party to meet her, I met her at home.

Was it the same thing with you, or there are details you would like to add, at least on your own part?

Wife: He used to come to the house and I did not think of getting married to him. He was young and always coming then and nothing more. When he approached me, I was scared. He even went and paid my bride price before the marriage and I said ok and since he is related to my mother we will move on from there.

Was there any opposition from anywhere, relatives, friends, concerning your marriage?

Husband: When I proposed to her, she said is it not against our tradition? She asked her relations and they said the marriage was permissible.  So, there was no opposition at all and my people trusted my judgment. Right from when I was growing up, some of them sensed that I was going to be a very responsible person. And as the English people said, the child is the father of the man – meaning what you will be in the future can be detected from your childhood. My people believed I don’t take wrong decisions. So, we went ahead and did what we were supposed to do and got married.

Was there any opposition from your side, from relations, friends?

Wife: There was no opposition from my side.

What made you decide to go for your wife considering the fact that they were so many ladies available for a pick within that period?

Husband: Take a good look at her to start with, that is the starting point. I was not entirely an ugly man and it would have been strange for me if I were not taking somebody that is looking attractive but that is secondary. The basic thing is that she has a pedigree and her background was such that one could easily get attracted to her or her siblings because her father was a prominent inspector of education in those days. Her mother too was a prominent rich woman. Up till now, there has not been an Ugep woman who is richer than the mother. She was in business, had a lot of money and was a contractor. So she had a background; she had a good upbringing at home and that is the basic thing, the physical appearance was just secondary. Again, she is on the quiet side, very reticent.

What qualities made you choose him above other eligible bachelors or suitors within that period?

Wife: As I was growing up, people were afraid of me because I was a quiet person, an introvert. So, people don’t come to me, I was a loner sort of but friendly. He was also very friendly and caring.

How did you propose to her? What exactly did you say to her as to make her accept to marry you?

Husband: It’s was a very funny beginning. I invited her and the elder sister as my relations and they did not know what I had in mind.  And after eating, I called her elder sister aside and said this is what I have in mind and I am going to tell Koko. Is it proper for me to do so? And she said there is nothing wrong with that except that we are close relations and if it is not good enough people will say no. Frankly speaking, I was a bit hesitant and believe it, everyman has a bit of cowardice in him no matter how he pretends. Even after I had spoken to her elder sister, I found it difficult to say so to her but I summoned up courage and told her. I said to her if she knew it’s possible for us to get married. She looked at me strangely while the sister stood there just laughing. She was very quiet; she was expressionless. We could not know whether she was happy or not with the proposal but I told her.

What did you say when he proposed? What exactly did he say and what was your reply?

Wife: I was shocked because I did not expect him to make that kind of proposal to me, but later my elder sister talked to me that it is the same family, after all, we in Eniong Abatim marry one another even as we are all related. Because I was scared of him, I forced myself to accept him. I used to respect him. So when he said that I did not know what to do; I had to accept him.

What do you remember most about your wedding?

Husband: I must say it was very smooth, no challenges. There is nothing that happened that day  that I feel worried up till now; it was happiness  all the way; it was a very good day and a friend of mine was my best man, my classmate during my high school at Holy Family College, Abak. My friends came that day and gave me support. The man who proposed my toast, late Chief Timothy Omang, described me as a durable character; that I will not change. The only thing that happened that day which really upset us in the evening was that my dog that we were very fond of, was knocked down and killed by a very good friend who came to visit. It behaved like a human being. It would come, extend its hand to shake you as a visitor and come back to sit at my feet. So it was as if we lost a human being that day.

Wife: It went well; we did not have any challenge. It was ok, I was happy that day, my friends were around me. So, it was a good day.

Could you remember your first misunderstanding in marriage and how did you handle it?

Husband:  Have we ever disagreed?  It sounds incredible. We understand each other. The same person, who proposed my toast and said I was a durable character, had hinted in the course of his speaking that my wife must be very understanding because the man he is marrying is a bit temperamental. He said I had fallen out with the governor of the state, and all that kind of stuff. But apart from all those warnings, I myself was full of respect for her because of her character.

Husband:  I like people who understand and she understands. She is an intelligent woman. In her degree, she just missed a first class narrowly but made a second class upper and then went on to do a master’s degree. So, she is intelligent enough to manage a turbulent husband. So, my admiration for her stems from many qualities. She has her own way of always convincing me not to do certain things I would have done. It is a great virtue for a woman. There are certain things I would want to do and she advises me quietly. Sometimes, I raise an argument and she feels it is appropriate. But when she advises me, and I keep quiet, I don’t respond, she knows that she has won.

Wife: He is very understanding but he talks too much and has lots of friends who come around. So, his friends have made me to be talking too much now.

So in this era of broken homes, what advice do you have for a young one, bachelor, who intends to get married?

Husband: A man who wants to have a happy home should be tolerant because it’s not every young man who has the kind of luck some of us have. Young men who want to get married should not have pre-conceived ideas that can lead to people inheriting prejudices. At times you are told some funny stories about your wife before she got married and you form an opinion; you start judging her even without experiencing her. People should guard against that because even you the man, before you got married, could have had some moral issues. So, the woman has the right to probe your moral standard before you got married too. Therefore, don’t probe her and she should not probe you. Approach marriage without prejudice and you will have a good marriage. People should judge their wives after they have got into their homes not before they do.

What advice do you have for a spinster who intends to marry?

Wife: They should be humble and show respect totheir husbands. Like in my case, I take my husband as my number one. I respect him a lot especially when people are around so that they copy from me. Take them the way they are. My husband is not a saint but I have accepted him the way he is and he has also accepted me the way I am.

In light of rampant divorce cases these days, from your own personal experiences, what pieces of advice would you want to give newly-married couples on how to make their marriage last as long as your own has lasted?

Husband: For the new ones coming into marriage or perhaps who have turbulent marriages, they should learn to be very tolerant; otherwise the abrasions by any of them can be a source of conflict on a permanent basis. People tell me of nagging wives. For wives who complain whether there is something wrong or not, they must adjust.  For men, just be an understanding person, be patient, don’t rush to conclusions; be prepared to listen to your wife’s advice because it is not always that they are aggressive. Sometimes they talk sense and if their suggestions are good, you take it. Besides, don’t be too proud to admit your error. So be a listening husband just like the wife should be a listening wife.

Wife: For a young lady, the people, who are coming up, it is important for them to be tolerant and understanding. An understanding wife contributes more to the longevity of the marriage than the contribution of the man.