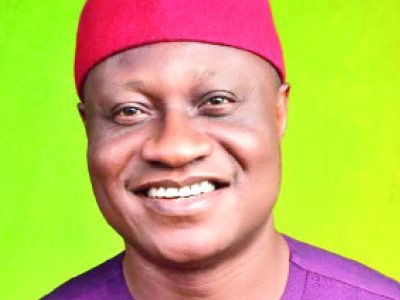 The member representing Awka North and South Federal Constituency in the National Assembly, Hon. Chinedu Onwuaso, has given insight into what the Southeast governors and other leaders in the geopolitical zone will do to protect Igbo land from terrorists and killer herdsmen.

In this interview with Sunday Sun, he also spoke on other issues of national concern. Excerpts:

You have clocked one year in office as a federal lawmaker. How has the journey been so far for you?

Well, I want to be honest with you; looking at the state of the nation when we were inaugurated and the take off, you will know that actually it has been a tumultuous time. But that notwithstanding, we have done very well so far. I will say that I have a good vision for my people and I have been implementing it. It has been a visionary representation like I said. The journey so far has not been easy, but I wouldn’t say that we have not done enough considering the time. We were inaugurated on 11th of June, 2019 and it has been part of the journey to learn; coming in to the chambers with a lot of new people and then new faces. Many of us are first timers. It entails that first of all you have to sit properly and learn and see what the direction of the government is. This is because you can’t go differently from the basic mission of the executive itself. You have to work in tandem with what is obtainable within the time.

What do you think should be done to secure the Southeast and, of course, every other part of Igbo land well in view of the reported migration of youths from the North suspected to be militia Fulani herdsmen and Boko Haram members to the Southern Nigeria, especially the Southeast?

The duties of governors are well defined in our constitution. The right to stand as the chief security of a state the moment you are sworn in as governor just like the president is the chief security officer of Nigeria. It stands out completely. Whether you like it or not, Nigerians look forward to the kind of united front that the Southwest took when it came to protecting their region due to some reoccurrences – kidnapping, robbery and others. They formed Amotekun. I believe that the only thing that they had differently from the Federal Government was that there was no law backing it, which they later adjusted. Every state’s legislative arm started looking into that and at the end of the day, they were united. So, if it comes to the Southeast, I don’t know why the Southeast governors or the legislative arms will not come together and say, ‘look, we need to form a front that will help us checkmate incessant movement of arms into the Southeast; that will help us protect our farmlands so that our farmers will not be in danger all the time; their crops will be allowed to grow. I don’t think that there is anything wrong with that. This is because security is very important. Take an example from what Benue State did. They locked horns with the Federal Government, but it is now the Federal Government that has to proffer a solution. This is because if the governors wait, the people that they are governing will suffer. And by the time you diminish agricultural activities from the lifestyle of our people in the Southeast, I mean, you have reduced close to 70 per cent to being hungry. So, it is the duty of our governors to come around and agree. They should not for the sake of patronage forget their primary duty, which is securing the lives and property of the states they are governing. That is why we talk on issues about security votes and other things. And secondly, let me use Anambra State as a simple example where we have Anambra State Association of Town Unions [ASATU]. If the President-General of a town union cannot summon the courage to set up an apparatus to protect the town, what is his achievement? It is not a social club. If you have an issue, it is your duty to bring it to the forefront or look for a solution. Present a solution to the state government, ‘this is what we need to do to curb this.’ and since it is an association there will be each other’s support. There is nowhere you don’t see crime and criminal acts. Nobody will say specifically that ‘look, it is this group of people that are trying to invade the Southeast’. All we need to do is to step up and guard our places just like others are doing. You don’t stay in your house and be crying everyday and laying allegations here and there when you cannot step up and do what you are supposed to do. Others are doing that. There is no foreigner that enters the Southeast that you cannot easily trace because our culture is so distinct that the moment you see a South Easterner you will know that this is a South Easterner. So, it is an easy thing to organize ourselves and then check up. If every town monitors who comes in and goes out; if every point of loading and offloading luggage is properly checked, why can’t we be able to curb it? If you see foreigners who are inhabiting a particular portion of your farmland, raise the alarm, gather the people, let them go there and ask questions. We can’t sit one place and be pointing and making noise while the people who are bestowed with the rights to conduct the security of the place are not talking or doing anything. You are pointing fingers and laying blames. You are saying certain persons are sponsoring it. It doesn’t work out that way. We have to be systematic, objective and we have to be certain in the line of action, the speech and the expressions we display, especially in this present day Nigeria. I am not saying that those things are not factual, but what I am saying is that facts have to be in place. People who are concerned to do the needful have to do it until it gets beyond what they can do then we know that there is a problem.

Ndigbo are making case for presidency in 2023. Alongside others, they also support the call for restructuring. Where do you stand on the issue of Igbo presidency and restructuring?

The issues surrounding the infectious disease bill which the Speaker of the House of Representatives and other lawmakers are pushing for have not yet abated. Recently, the Nigerian governors rejected the bill and many Nigerians have rejected it as well on the grounds that it could spark religious warfare among other reasons. What exactly does the House intend to achieve with that bill?

Well, in every presentation of bill, somebody must be behind it. He knows what he wants. He is trying to sell it to the people: ‘Look, if we do things like this, it will work out for good for everybody.’ I think that was what the Speaker did. He felt that there are certain things that are not presented in the existing laws that we have. And so, he said ‘look, we need to improve these laws to be up to date based on the present day situations.’ And you see, I don’t really blame people because sometimes what is circulating affects our mindset. If one will look into the bill as it counts; I am not the proponent of the bill actually, but I have been able to sit down, read through the bill and discovered that it is not everything that is stated in the bill is bad. In fact, it is just one or two things that one will say ‘look, I don’t agree with this.’ But one thing with most Nigerians is that we don’t ask; we work by our sentiments. In the first instance, I really want to say well; maybe it is because of the timing. Maybe the timing of the bill came when people were in grief; they were not happy with the things happening around. With a lot of sentiments; with the issue of the running of COVID-19; with the propaganda that followed especially with the sharing of the palliatives of COVID-19 by the Federal Government. With sentiments coming from the international community that a certain foreigner is part of this and that; that China is sponsoring this and that; World Health Organization is this and that. And all those sentiments charged up the polity. And then, behold, the Speaker came up with the bill. And so, people are not seeing the substance of the bill like I said. People anchor on a lot of sentiments on that bill. And you know, at the end of the day, it is the feeling of the masses that supersedes everything. But let us take it or leave it, one day this same bill will come on board. Like I said, the grey areas might be adjusted, changed and restructured to suit our present day situations in Nigeria. I won’t say that the governors were wrong by their decision because they are also the representatives of the people. But I will say that throwing the bill away and condemning it all in totality is wrong. All that is needed to be done is bring it home and check for the grey areas that we don’t want. Let it be stricken out. But for those places that are what we need for the present day situations, let us retain them and then pass the bill.