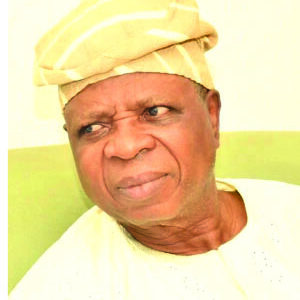 Former Minister of Transport and member, PDP Board of Trustees, Chief Ebenezer Babatope has said that regional or zonal considerations should not be allowed to determine which part of the country produces the president in 2023. He said the two major political parties; APC and PDP should be allowed to nominate candidates of their choice for the election. He however said that the South East geo political zone is more deserving of the position than the other five zones in the country. He also spoke on other national issues in this interview by TUNDE THOMAS.

There are indications that the North wants to pick candidates for the 2023 presidency on the platform of the APC and PDP, how do you react to this?

What I know is that the PDP, which I belong to, will sit down,discuss the issue,and then map out the right strategies that will enable us to win the election. It is not any zone or region that will pick candidates for us.The issue of candidates for elections should be decided by political parties.PDP should pick candidates that will win elections for them,and APC should also be allowed to pick candidates that will win elections for them.If APC is thinking of fielding a Northerner, that’s their own problem,I’m not a member of APC. But if you are talking of PDP,I will advise my party about the right path to take but like I said earlier,the issue of candidates should be decided by the parties.But let justice,and fair play be manifest in picking the candidates.

For us in PDP, we believe in party supremacy,and when it is time for us to pick candidates for the election this is what will come into consideration. The party leaders will meet,and take decision that will be in the best interest of our party.

We have been hearing that story for a long time. He is free to go anywhere he wants to go.Nobody can hold him down but what I know is that by the grace of God, PDP will win the next general elections in 2023 because Nigerians are already tired of APC’s inept administration.Nigerians are fed up.Go and ask Nigerians today how they feel about APC led government.Nigerians will not allow APC to win the next general elections because APC has not done anything spectacular for them.Nigerian people will not make the mistake of voting for APC again in 2023.We in PDP are already aware that Nigerians are fed up with APC,so we are bracing up to win the next elections.

On Dave Umahi’s defection, we in PDP are already fed up with the reports because  we have been hearing about it for a long time. Let him go wherever he wants to go. He is free to join APC if he wants to .  Although anybody that leaves the party is a big miss but the party will not die because someone leaves the party on his own volition.

Cuts in….If some other PDP governors want to join Umahi let them go ahead but what I know is that God will decide the 2023 general election in favour of those who favour the people,and the PDP right now favours the Nigerian people and it is my hope that APC will not do anything that will obstruct PDP from sweeping into power come 2023.

Although some people may be thinking about the implications of that should it happen but then this is democracy,you can’t force people against their own wish. The Nigerian constitution guarantees freedom of expression,and association. It is ideal that they should remain in PDP but if they want to leave the party nobody can hold them against their wish.

I  believe that PDP should try to give it to the South-east on the basis of equity,and justice because it is the only geo-political zone that is yet to have it since 1999. Other five geo-political zones have had it but however this is my own personal opinion,it is the party that will take the final decision,it is the party that will have the final say over the issue.What is however important is that there should be justice for all.What I know again is that  the PDP will never deny the South-east the right  to field candidates  for elections including that of the presidency.

What does the recent EndSARS protests tell you about the Nigerian Youths?

I won’t want to comment on that issue for now. No, because the issue is currently being investigated by many governments in Nigeria including the federal government.Let the Tribunals finish their assignments ,let them make  their pronouncements, and then I will be able to make comments. Let’s wait for the outcome of the various enquiries being   set up  by the various state governments so that we can come up with rational  judgements and conclusions.

Although   there are  reports that government may deal with some Nigerians over the EndSARS protests but that  would be an   irrational, and hasty decision. They shouldn’t  rush into doing that, they should  first look into the facts of the matter.They should  exercise patience instead of rushing people to court.They should  allow the tribunals to finish their findings.Charging people to courts in a haste is not going to bring good results.Rushing to court to get hasty judgements on EndSARS  protests is going to be dangerous for our democracy.

There is no doubt that the  times are hard; the economy and securitywise, what do you say to this?

It is very unfortunate that Nigeria is in this situation because  things are very hard,and Nigerians are suffering. This is a difficult time for Nigerians. But Nigerians now have the opportunity of comparing the PDP,and APC but definitely the difference is very clear now.There is so much hunger,and poverty in the land now.Things have never been this bad,and tough.Nigerians are angry, and disappointed.

Many have even become dejected, but my advice is that they should not lose hope.The general elections coming up in 2023 will provide a good opportunity for Nigerians to vote out APC.If the elections are not manipulated or rigged,definitely PDP will bounce back. I’m very confident that PDP will defeat APC in 2023.Nigerians want good governance, and  APC has not been able to provide Nigerians dividends of democracy which they are yearning for.

The Independent National Electoral Commission,INEC recently announced the time-table for 2023  general elections but some Nigerians   are saying that it is too early to do so, what’s your take on that?

I must confess to you that I don’t have confidence in INEC.Let INEC continue to do whatever it likes but what I know is that it is the will of Nigerians that will eventually prevail.The present INEC under the leadership of  Prof. Mahmoud Yakubu has never been a truly  independent body. They do elections, and come up with figures they like, and they  manipulate figures.INEC has not been doing well at all.I know that very soon Nigerian people will pass their own judgement on INEC.This present INEC has not done well at all.

What’s your reaction to the renewed agitations for restructuring of the country?

If we don’t restructure this country, Nigeria will continue to be in serious mess. Nigeria is a federation, and therefore the country must be run on the basis of federal principles.If we fail to restructure,it is like postponing the evil day.As long as we are running away from restructuring,we are running away from reality.Federalism is the best answer for Nigeria’s structure.The present unitary system we are running was foisted on us by the military.Nigerians will never want anything that will break up their country,and I for one will never support anything that will break up my country.Let us restructure and when we do that all will be well with our nation.

But the issue of restructuring has become a source of disagreement between Southern,and Northern leaders…

Cuts in…But Northern leaders are embracing restructuring now.Look at Gov. El-Rufai of Kaduna state ,he has  been very articulate about restructuring.He was the Chairman of the committee set up by the APC on restructuring.This issue is not about the North or the South, it is about what do we make of Nigeria’s federal structure. Even the governor of Sokoto state, Aminu Tambuwal is talking about restructuring. My advice to President Buhari is that he should ensure that steps are taken  towards restructuring of the country now, and by doing so, he has nothing to fear.Taking the bull by the horn will  not only give him good name but also good legacy.

We don’t need to organize another national confab before we can start the process.That 2014 confab did a lot for Nigeria. It spelt out details for restructuring of Nigeria. We don’t need to waste money and resources on organizing another confab. Let’s go back to 2014 conference, and then set up a high-powered Committee to study it,and recommend how we go about it.

The 2014 conference report should form the basis for restructuring of the country. We should not be talking about another conference again. The 2014 national conference  should be the starting point for anything  good about Nigeria. I was not a  part of that conference but   that conference took a lot of far reaching decisions that will help in moving Nigeria forward. If we restructure, a lot of problems facing Nigeria today including insecurity will be resolved but if we don’t do the right things we  are going to arrive at wrong decisions.

0 comments on “Why PDP, APC should zone 2023 presidency to South East –Ex-Minister, Babatope”