Why Wike deported Almajirai from Rivers –Nsirim, Commissioner for Information 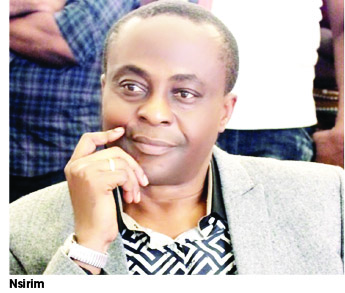 Rivers State Government has been in the news in recent weeks over its management of the Covid-19 pandemic. While some critics of the government say the state governor, Nyesom Wike, has been grandstanding or unnecessarily flexing muscles with the Federal Government of Nigeria, others say it was unwise for the government to lockdown some local governments in the states. In this interview, Pastor Paulinus Nsirim, the Commissioner for Information and Communications, Rivers State, speaks on why the intentions of the state governor have been misconstrued in its fight against COVID-19 pandemic. He also tells us some practical steps taken by the state government in minimising the spread of the virus and its palliatives, which are unprecedented in Nigeria.

Since Rivers State reported its first index case, how has the state governor championed the fight against COVID-19, considering that yours is a strategic state in the federation?

His Excellency, Nyesom Ezenwo Wike, as a proactive and strategic leader, did not wait for the state to record an index case before he set up a five-man Inter-ministerial Committee on Awareness and Enlightenment Creation. This was because Rivers State, being the headquarters of the hydrocarbon industry and a commercial hub, attracts an influx of people on a daily basis.

As soon as the state recorded its index case, the governor, in compliance with Section 2 and 8 of the Quarantine Act, Cap. Q2 Laws of the Federation of Nigeria, 2004, issued the Declaration of Dangerous Infectious Disease on 19th of March, 2020, declaring COVID-19 as a dangerous infectious disease.

Further to the said declaration, and, in accordance with Sections 2, 4 and 8 of the Quarantine Act, the governor issued the Quarantine (COVID-19) and other Infectious Diseases Regulations, 2020 on 19th of March, 2020, which provides the legal framework for the actions required to be taken by government in combating the spread of coronavirus in the state.

It was based on this legal foundation that the ban on public gatherings and closure of air, land and sea borders were implemented. Though some armchair critics did not see the merit in these actions, Governor Wike has been vindicated, as both the federal and state governments have started copying this model.

Before now, the State Treatment Centre at Eleme was fully equipped, in addition to the training of surveillance officers. To ensure effective implementation of these strategies, the governor himself is the Chairman of the State Task force, made up of service commanders and the commissioner of police. To prevent community transmission of the virus, the governor has implemented complete lockdown in some parts of the state where social distancing is not being put into practice.

To cushion the effect of the hardship suffered by the people of the state because of the virus, the governor set up a 34 Member Palliative Committee, made up of clergymen, military, police, media and civil society groups. This committee has, since inauguration, distributed food items to the less privileged, special homes and all the local government areas.

To further strengthen government’s resolve to ensure that no one complains of hunger this period, the state government set aside the sum of two N2 billion to buy off all the foodstuff produced by farmers and fishermen in the state. This initiative is being coordinated by a food purchasing committee.

Quite encouraging. It’s being insinuated that Rivers State Government hasn’t been cooperating with the Federal Government in the fight against COVID-19. What’s the true situation?

A lot of people misconstrue Governor Wike’s insistence that those who come from outside the state after the borders were closed be subjected to the relevant protocol of checking their Coronavirus status, by health workers in the state, as a confrontation to the Federal Government. For example, when the issue of the arrest of two pilots of Caverton helicopters and their passengers, who flouted the Border Closure Executive Order broke out, those who were quoting the Exclusive List in the constitution didn’t see any merit in Governor Wike’s decision. But we thank God that the Management of Caverton Helicopters later apologised to the Rivers State Government for flouting the Executive Order.

Besides this, the reluctance of the Federal Government to support the State Government in the fight against COVID-19 is something the governor will never sweep under the carpet, because there is no justification why a state that produces the wealth of the nation would be so neglected.

Local governments, like Obio/Akpor and Port Harcourt LGAs, are still being locked down when other states in Nigeria and FG are relaxing the lockdown measures put in place. What’s the justification for that?

Obio/Akpor and Port Harcourt Local Government Areas were completely locked down because of the intransigence of the residents of these two local government areas in the face of this extreme danger posed by this virus. As a man determined to protect the lives of those who he swore an oath to protect, the governor is determined to take these harsh but necessary measures.

Critics of the government say the creation of the Taskforce on Border Monitoring is merely jobs for the governors’ loyal boys. What’s your take on that?

The setting up of the Task Force on Border Monitoring is a bold step by the governor to check the excesses of security agencies who have been compromising security at the various borders leading into the State. Besides, those recruited for the assignment know the terrain in their various local government areas, and will surely complement the activities of the security agencies.

Many people have been complaining that the lockdown has had an adverse effect on their finances and survival. What do you have to say about that?

The governor has, in his regular interactions with the people of the state, either through broadcasts or press conferences, repeatedly emphasised that the coronavirus pandemic is more than conventional warfare. He calls it a season of sacrifice and has always sued for the cooperation and understanding of everyone living and doing business in the state. The governor shares in the pain occasioned by this virus, and he is praying fervently that it comes to an end soon.

How effective are the activities of the Palliative Committee and the Food Purchasing Committee put in place by the state government?

The palliative committee set up by the governor developed a community-based model where you have the various members of the palliative distribution committee made up of clergy Men, traditional leaders, CDCs, women and youth leaders. These ward-based committees have helped to ensure that the palliative got to the less privileged. The Food Purchasing Committee, on its part, has set up Food Banks and Agric Desks in the 23 local government Areas in the State. This has made the supply of foodstuffs to the palliative committee a smooth process.

Rivers is a state with many expatriate oil workers. Have they contributed to the rise in the number of cases in the state, and how do you allay the anxieties of the populace of the risk posed by their presence?

Two positive cases recorded in the state were imported by oil workers. This poses a great risk to the people of the state, and that is why the governor is unrelenting in his efforts to ensure that our borders are properly policed.

The deportation of Almajirai from Kano has been in the news recently. What’s the position of Rivers to the influx of these itinerant beggars?

It is no longer news that the Almajirai have been deported from one Northern state to the other. Rivers State Government has followed suit, to deport those of them in Rivers State. No one should politicise this move nor employ any form of double standards, because what is good for one state is good for the other.

Amid the uncertainties posed by this pandemic, what message of hope do you have for Rivers people?

Rivers people should know that Governor Wike means well for them. His leadership style, since 2015, has clearly shown that he is determined to take actions that would be for the best interest of all. I want to join his Excellency to plead with all and sundry to bear with the government and obey all advisories being put in place during this period. I believe that, if we obey “Stay at home Order” and social distancing, this virus would be chased away from our state. All hands must be on deck at this moment in our history. Together, we shall win this battle.

0 comments on “Why Wike deported Almajirai from Rivers –Nsirim, Commissioner for Information”