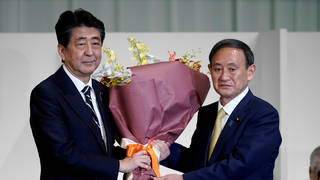 Shinzo Abe’s longtime ally Yoshihide Suga was voted in by the parliament to succeed him as prime minister of Japan. Having led the country since 2012, Abe resigned due to health problems.

Suga’s candidacy was approved by both houses of the National Diet, Japan’s parliament. The 71-year-old politician, who was described by the local media as Abe’s close confidant and “right-hand man,” had previously promised to continue his predecessor’s key policies.

Suga had held the important position of chief cabinet secretary since 2012, acting as the government’s top spokesperson, among other roles. On Monday, he was chosen to replace Abe as the leader of the ruling Liberal Democratic Party.

Abe attended his final cabinet meeting shortly before the vote to confirm his successor. “I devoted my body and soul for the economic recovery and diplomacy to protect Japan’s national interest every single day since we returned to power,” he told reporters in his farewell speech.

A self-avowed reformer, Suga said his top priority in office will be to combat the coronavirus pandemic and support an economy struggling amid the health crisis, but he has also vowed to pursue some of Abe’s priorities, including ‘Abenomics’, which combines easy monetary policies with fiscal stimulus.

Abe, Japan’s longest-serving prime minister, announced his resignation last month, pointing to a serious health issue that would not allow him to continue, and which even resulted in a number of hospital visits in August.