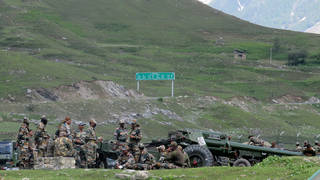 At least 20 Indian Army soldiers have died in clashes with the Chinese forces over Galwan Valley, a disputed region north of Kashmir claimed by both Beijing and New Delhi. Beijing has not confirmed any reports of its casualties.

The Indian Army initially confirmed the death of one officer and two soldiers, but issued an official statement on Tuesday evening adding that the seventeen soldiers who had been critically injured were “exposed to sub-zero temperatures in the high altitude terrain” and succumbed to their wounds.

India refers to the disputed region as Eastern Ladakh, while China calls it Aksai Chin. The area was once claimed by the princely state of Kashmir, annexed by India after its independence in 1947 – and source of an ongoing dispute with the neighboring Pakistan as well.

The region contains several strategic mountain passes, and a highway connecting Xinjiang and Tibet runs through one of them. India attempted to challenge China’s de-facto control of the area in 1962, but the month-long war ended in a decisive Chinese victory.