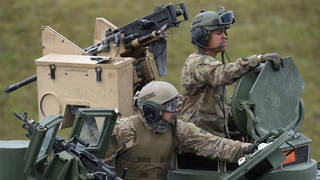 You know NATO’s in bother when even the Atlantic Council’s head honcho realizes the game is up. It’s now abundantly clear that the US’ main focus is switching to Asia, and Europe is becoming increasingly irrelevant to Washington.

The Atlantic Council’s worries are understandable. After all, the think tank saw its annual revenue rise from $2 million to $21 million between 2006 and 2016 on the back of NATO’s expansion into Eastern Europe. It’s most certainly raking in much more moolah now.

The main driver of the pressure group’s financial success was good timing. The US establishment had decided to reinstall Moscow as the “chief enemy” in the post-Osama and Saddam-era, and the pro-NATO outfit’s adroit anti-Russia messaging was useful. It also cultivated dozens of high-profile ‘fellows’ – united by their hostility to everything Russian – and it was quick to jump on the “disinformation” bandwagon. Indeed, it wound up providing censors to Facebook during the height of the “Trump-Russia” hoax.

But now the good times are over. China is the new bogeyman in Washington and Russia is becoming old news. The narrative has been exhausted.

The Democratic Party has flipped from mentioning Russia non-stop to barely talking about it at all. Meanwhile, Emmanuel Macron is trying to pull Moscow “back” into Europe, and Angela Merkel, the ‘Atlanticist’ German chancellor, has entered her lame-duck period.

What’s more, even Eastern Europe isn’t united in believing Russia is the big bad wolf. The Polish president is more interested in picking fights with the LGBT community – he believestheir ideology is “worse than communism” – and Hungary’s Viktor Orban said last Friday that his “government attributes special significance to relations with Russia.”

Clearly, NATO’s wheeze is running out of puff. At this point, the only people really invested in its success are its thousands of employees, and the arms industry. Of course, as the New York Times reported in 1998, the main driver of all that NATO expansion was to offer “[American] arms makers a new and hugely lucrative market.” Don’t weep for them, however, because China is a far juicier bad guy, from their financial perspective.

The Atlantic Council is fully aware and obviously fearful of what it means for its bottom line. We know this because its CEO and President Fred Kempe basically conceded the point in an op-ed published on Sunday. Kempe spoke of “transatlantic decoupling” and waffled on about “democracy, open markets, and individual rights.”

“The damage [of a decline of US influence] would be far-reaching for America’s worldwide interests, for European unity and influence, and for the most significant community of democracies and open-market economies the world has ever known,” Kempe wrote.

The old “NATO spreads democracy”canard is beyond parody at this point. Even “Freedom House,” a US government-funded ‘regime-change’ NGO, admits that five of NATO’s 30 members are not democracies: Albania, Hungary, Montenegro, Macedonia and Turkey. But fret not because anyone with half a brain knows NATO is about American geopolitical power projection, not ‘values.