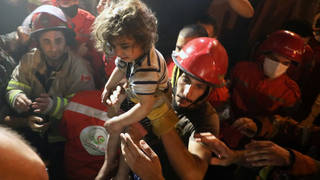 Follow RT onThe Lebanese capital Beirut has been rocked by a powerful blast after a diesel tank blew up in a densely-populated residential area. At least four people died and scores were injured in the explosion and subsequent fire.

Photos and videos published on social media show streets littered with debris and rubble, as well as damaged buildings, as firefighters try to extinguish blazes raging at what appears to be the scene of the blast.

At least four people lost their lives in the incident, the Lebanese Red Cross has confirmed. It also said that an unspecified number of people injured in the blast were rushed to hospital.

A video aired by Lebanon’s LBCI broadcaster showed emergency teams rescuing a toddler from the ruins of the building leveled by the fuel-tank blast.

The exact cause of the explosion is unknown, but local media reports suggest that a large tank used to store fuel or gas went off near the bakery in Beirut’s Tariq Al-Jadida neighborhood.

The Lebanese military has cordoned off the area, while the local civil defense groups organized the evacuation of the local residents, including people trapped on the upper floors of the building which was caught in the blast and fire.

The incident took place as the Lebanese capital was still reeling from an August explosion, considered one of the most powerful ever non-nuclear blasts. Some 2,750 tons of ammonium nitrate stored in the city port blew up, killing some 200 people and injuring more than 6,000. More than 300,000 were left homeless by the explosion.