Airfields made from ice? New Russian technology promises to allow military transporters to touch down inside Arctic Circle 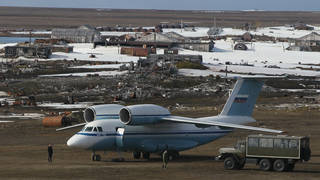 Russia’s Ministry of Defense is considering making military airfields out of ice within the Arctic Circle, after developing a new technology that enables heavy aircraft to land without the need for an asphalt runway.

The Bauman Moscow State Technical University has created a system that uses special chemical re-agents to change the structure of ice, enabling planes to touch down. In the future, heavy military transport aircraft such as the Ilyushin Il-76 will be able to land inside the Arctic Circle, despite weighing around 100,000kg when empty.

Speaking at the Army-2020 forum, Evgeny Storozhuk, Bauman’s vice-rector for economics and innovation, explained that the technology will continue to be tested over the next year.

According to Storozhuk, the strength of the ice landing strip will be monitored by fiber-optic sensors, which would maintain the frozen ice by adding re-agents when the temperature gets too high.

Despite the extreme cold, Russia has long had airfields in the Arctic Circle. The country’s northernmost military base, Nagurskoye, is located 1,350 kilometers north of the Russian city of Murmansk, on the island of Alexandra Land. Opened in 1947, Nagurskoye was used as a base for long-range Soviet bombers. In the 21st century, the airbase has been updated to modern specifications.

As well as brand new aviation technology, Russia’s Army-2020 forum has revealed the latest updates in tanks and weaponry. Seen for the first time at the grand military meeting, world-famous gun manufacturer Kalashnikov announced a brand-new assault rifle, the AK-19, and a ‘smart’ shotgun with an under-barrel digital camera.

0 comments on “Airfields made from ice? New Russian technology promises to allow military transporters to touch down inside Arctic Circle”