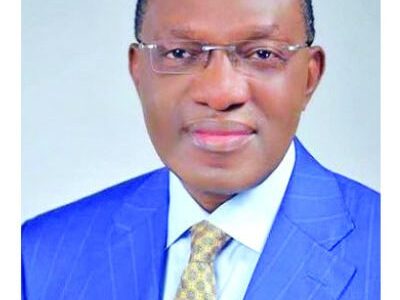 On Monday, June 21, barely six days to the Saturday, June 26, 2021, governorship primaries of the All Progressives Congress (APC), Nigerians woke up to behold a theatrical bent to an otherwise smooth electioneering.

Cast as a 60-second amateur video, with cast and clarity of recording deliberately obscured, a narrator sought to explain the bizarre setting.

According to the male voice-over cast, Senator Andy Uba, the leading APC governorship aspirant, was indebted to Heritage Bank, and staffers of bank, anxious not to be laid off due to paucity of funds, had elected to picket the Abuja residence of the senator.

For discerning members of the public who saw the macabre show, the puzzle was, when did banks start debt recovery through public shows? Indeed, fiduciary issues centred on obtaining and repaying loans are guided by terms, conditions and agreements.

While it is left to the Uba team to offer explanations

surrounding the Heritage Bank imbroglio, watchers of political developments within Anambra can easily locate political undertones in the entire drama.

With time fast ticking away, drawing the November 6, 2021 Anambra State governorship election closer, political players across party divides are beginning to get desperate, hence, the seeming recourse to less than noble schemes.

No doubt, Anambra is endowed with eminently qualified candidates who have distinguished themselves in various fields of endeavour. However, there is certainly more to governance than being an all-comers affair. Indeed, it takes a candidate who has full grasp of what the governance of a diverse people with varied interests and yearnings entails, someone who understands the dynamics of power and, perhaps, boasts of first-hand experience regarding what leadership entails, to provide the kind of leadership that Ndi-Anambra are looking for at this period of serious challenges.

Among an array of other aspirants is Distinguished Senator Andy Uba, who perfectly fits the bill.

A top contender for the ticket of the APC, Uba has the capacity not only to lead the party to victory, but to also bring in abundance his age-long political experience and wherewithal to bear in serving Anambarians.

One whose records speak loudly for him, Uba, who was until 2019 a Lawmaker representing Anambra South in the Senate, left footprints and lofty legacies stamped eternally for all to see. This was evident in the quality of bills he sponsored for the overall wellbeing of the citizenry. The bills, which were eventually signed into law and are in effect to this day, include the Agricultural Credit Guarantee Scheme Bill; the Nigeria Railway Corporation Bill and the National Inland Waterways Authority Bill. There is no arguing that these pieces of legislation have far-reaching positive impact on the socio-economic development of Nigerians. While the bills were successfully assented to by the President, there were scores of others that had enormous potential to better the lives of Nigerians, yet were left unattended to.

Remarkably, success at the Senate did not come as a surprise because Uba had over the years built a wealth of experience watching, serving and learning leadership ropes as Senior Special Assistant on Special Duties and Domestic Affairs to ex-President Olusegun Obasanjo.

In the 2007 election cyrcle, Uba contested and won the Anambra State governorship election, but his reign was cut short following judicial pronouncement.

With a wealth of first-hand experience in the legislative and executive arms, it is without doubt that Uba stands head and shoulders above other contenders within the APC, and is the right candidate to heal Ndi-Anambra of the wounds caused by successive years of bad governance and poor management of human capital that abounds in the state.

The time, therefore, for the good and industrious people of Anambra to unite to save the state from destruction by choosing one who can provide effective leadership is now.

Already, the call for Uba to salvage Anambra has reached a crescendo, such that even the deaf can hear it. The people have had to grapple with bad leadership for a long time and know they can count on a unifier like Uba, who also goes by the moniker, Igwebuike: strength in unity.

This is not surprising, as Uba has proven to be a technocrat, an advocate of good leadership and a progressive leader who possesses the capability to turn the economic fortunes of the state around for good.

Not one to go into a battle without being adequately armed, Igwebuike already has his arsenal for the battle for the development of Anambra State through his Strategic Integrated Resource Development (SIRD), which aims to provide a people-oriented government. SIRD will be applied to efficiently re-engineer and revive Anambra State’s dwindling economy.

SIRD provides a sustainable blueprint for building institutions for economic development within the framework of structural adjustment and liberalisation of the economy. Its framework is anchored around some policy areas enunciated by Sen. Uba to trigger a socio-economic reform that will revive the economy of the state, especially in the areas of production and manufacturing.

For a state that boasts of manufacturing giants like Innoson Automobile plant, Chicason Group, Juhel Pharmaceuticals, Millenuim Industries, import and export merchants and other businesses, a well-articulated plan that provides an enabling business environment like SIRD will make a difference and trigger a value chain that will create employment for the teeming unemployed youths in the state.

Igwebuike knows this and has already designed the plan to create economic boost enablers to ensure improved productivity that will attract foreign direct investment and increase the internally generated revenue of the state. Notedly, Uba has also been emphatic about tapping into the vast opportunities in the agricultural sector to boost the economy. To him, the effective management of the sector will improve the earnings of the state astronomically.

Not left out are the areas of improved quality education, quality healthcare delivery and real-time information dissemination to ensure total inclusiveness. He also assures that the welfare of women, children and upholding traditional and religious institutions will be major pillars in his administration, as well as the development of local government areas.

As a strong advocate for empowering the local government areas for overall development of any society, Uba has vowed that the sanctity of local government councils would be upheld through regular elections.

It was, therefore, an elated Uba that received the Supreme Court judgement on Oyo State, against the use of caretaker committees in place of democratically elected council officials in local government areas.

According to him, creating an atmosphere for democratically elected Council Chairmen to perform their roles will rescue Nigeria’s democracy and foster the much needed development at the grassroots level.

For Uba, the judgement was a fillip for democracy. In his words: “Everyone knows that our local governments have been put down because of the greed of a number of governors who use a number of unconstitutional means to subvert the process and deny the third tier of government the necessary development.

‘’Thankfully, the Supreme Court judgement has come to its rescue and with the pronouncement, not only will Caretaker committees become illegal, but also the tenure of elected officials at the local government areas will be unassailable.

‘’We will not continue with such a practice as Anambra will not only have duly elected officials at the Local Government level, we will also ensure that elections are held at regular intervals as spelt out by the constitution.

‘’For me, the sanctity of the local government areas will be sacrosanct under my watch as Governor.”

Ndi Anambra, the man for our collective and progressive interests is Distinguished Senator Andy Uba and there is no better opportunity than now.

Distinguished Senator Andy Uba is without doubt the APC candidate that holds the ace to connect Anambra to the epicentre of Nigerian politics – an aspiration that goes beyond the June 26 APC gubernatorial primaries; but would certainly find expression in the November 6, 2021 governorship election, with an aim to restore, fix and build an Anambra of our dreams, with Senator Andy Uba as governor.