Anchors react to debate: ‘That was horrific’ 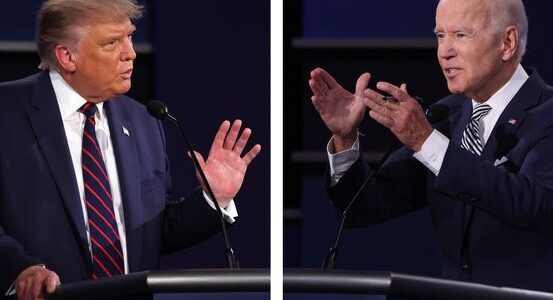 The insults, interruptions and chaos that filled the first presidential debate between President Donald Trump and former Vice President Joe Biden was described as a “s—show” by CNN’s Chief Political Correspondent Dana Bash on Tuesday.

Throughout the two-hour debate, Trump and Biden tussled over the economy, the coronavirus pandemic and the Supreme Court vacancy in one of the most chaotic, insult-laden presidential debates in modern history. They both leveled an unending string of personal attacks on each other’s character and judgment that led to constant interruptions as moderator Chris Wallace struggled to keep the candidates on track and from talking over one another.

“That was a hot mess inside a dumpster fire, inside a train wreck,” CNN host Jake Tapper said after the debate ended. “That was the worst debate I have ever seen. In fact, it wasn’t even a debate. It was a disgrace and it’s primarily because of President Trump.”

“The American people lost tonight because that was horrific,” he added.

Bash chimed in and went further.

“You used some high-minded language. I’m just going to say it like it is. That was a s— show,” Bash said, apologizing for “being maybe a little bit crude.”

“It’s the only phrase that I can think of to really describe it.”

True to form, Trump came to the debate prepared to repeatedly attack his Democratic opponent, frequently interrupting and forcing moderator Wallace to note that both candidates agreed to let their counterparts speak.

Trump claimed that “China ate your lunch, Joe” on trade. e questioned Biden’s intelligence and attacked his son, Hunter Biden, and described the longtime centrist Democrat as a “socialist” more than once. Biden described the president as a “clown,” told him to “shut up,” described him as “Putin’s puppy,” and called him the “worst president” in American history.

0 comments on “Anchors react to debate: ‘That was horrific’”