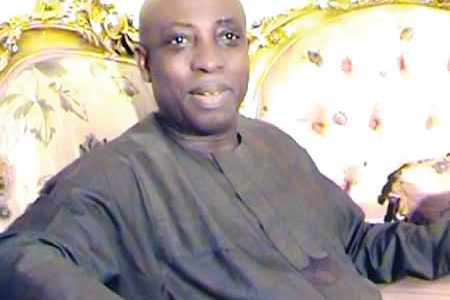 A pro-People’s Democratic Party group in Rivers State, Grassroots Development Initiative Worldwide (GDI), has told the leader of Movement for the Actualisation of the Sovereign State of Biafra (MASSOB), Ralph Uwazuruike, to apologise to Governor Nyesom Wike and the people of Rivers for insulting statements.

The group warned that unless Uwazuruike tenders an apology to Wike and the people of the state over comments he made on the recent demolition of two hotels by the governor, he ‘must surely face the music’, declaring the Igbo activist ‘persona non grata in the state or country where GDI exists’.

Uwazuruike had reportedly criticised Wike’s action and threatened to take actions that would cause the Federal Government to declare a state of emergency in Rivers.

The GDI condemned the verbal attack against Wike by Uwazuruike over the demolition of two hotels in Eleme Local Local Area of the state, adding that the governor’s action was targeted at checking the spread of COVID-19.

President General of GDI Worldwide, Bright Amewhule, in a statement at the weekend, insisted that Uwazuruike must apologise to the Rivers people for insulting the governor, who is their grand patron.

Amewhule, in the statement he signed with the group’s Deputy President, Paul Kobani, Secretary-General, Samuel Nwanosike, and five others, declared the MASSOB leader a persona non-grata in Rivers and any other place where GDI operates.

He stated: ‘Based on the realities on the ground, as the President General of GDI Worldwide, I, hereby, direct all members of GDI in any part of the world to be at alert.

‘Ralph (Uwazuruike) is, hereby, declared persona non grata in the state or country where GDI exists.

‘In all, we issue a warning to Ralph to render an unreserved apology to Rivers people and the world at large for calling Governor Wike all sorts of names, else he must surely face the music.

‘We have the capacity to contain Ralph Uwazuruike. He should also note we are Rivers people and not Igbo people. He does not know the meaning of Wike. He should stop insulting the Rivers State governor.’

GDI similarly condemned comments by two chieftains of the All Progressives Congress (GDI) in the state, Chris Finebone and Chima Nnoka.

Amewhule dared Nnokam to encourage his relatives to flout the Executive Orders of the state government and face the consequences.

‘For the avoidance of doubt, Governor Wike is a renowned lawyer married to a renowned judge. If we may ask, what are the field of Uwazuruike and Nnokam?,’ he stated.

One comment on “Apologise to Wike, Rivers, or ‘face the music’, PDP group warns Uwazuruike”

Honestly l have been expecting this notice about declaring this so call punk mr Uwazurike wanted ever since he poke his eyes into rivers state affairs in which he threatened our honourable excellency governor Nyesom wike and the entire rivers state people of causing problems and rivers will be declared state of emergency. I’m ready to uphold the rivers state honour in making sure this type of hooliganism comments never flourish anymore from an idiotic person like mr Nwazuruike. We ain’t taking mr Nwazuruike serious because his a traitor and touts, We only need to teach him a severe lesson of his life time, He should come out from his hideout and render apology to our governor Nyesom Wike and the entire rivers state people or face the music ?. Mr Uwazurike you’ve cooked your meal for the entire rivers people we’re on it.
So get ready to eat the entire meals prepared by rivers people. I guess you know exactly what that means mr punk.